Owner of Blackwell Productions routes all analog gear into a single MADI stream with A32 AD/DA MADI and ADAT converter.

Since 2012, Brandon Blackwell, owner of Blackwell Productions, has been putting his audio production expertise to work in a number of ways, from serving as front of house and monitor engineer for acts like pop star Camila Cabello to providing support services for a wide range of venues, including TV specials, theatrical events, seminars and conferences.

Based in South Orange, New Jersey, but working throughout the globe, Blackwell was in need of a way to convert his entire arsenal of analog outboard gear into multichannel audio digital interface (MADI) format for control at a DiGiCo console — which requires MADI — when mixing front of house or monitors.

Last summer, he purchased a Ferrofish A32 AD/DA MADI and ADAT converter at the advice of a colleague, and Blackwell said it’s helped simplify his setup dramatically by being able to route all of his analog pieces into a single MADI stream. 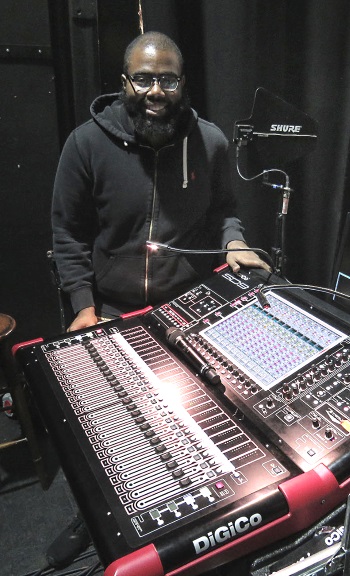 “I’m into using outboard gear, but I have to have a piece of technology that gets it all into my console,” Blackwell says. “With the A32, I can insert my gear into a single MADI stream. And, I have to say, the A32’s AD/DA conversion is the best I’ve heard.”

With a major pop tour on his schedule for next summer, Blackwell has been bringing his Ferrofish A32 to all of his gigs. And since he can get all of his AD/DA and MADI conversion out of a single rack unit, he can fit it in his luggage when he travels to one-off gigs.

“Being a one-rack unit, it hardly takes up any space,” Blackwell says. “So, I can just throw it in my suitcase and pack clothes around it.”

In conjunction with its transparent conversion and optimal size, Blackwell says that the A32’s dual-power supply makes the unit an essential piece of gear he can rely on for any gig.

“Having redundancy is very important especially during a live show, because you only get one chance to get it right,” Blackwell says. “Consistency is key to success, so it is nice that I can carry the same audio converter from gig to gig.”

In addition to simplifying his setup, Blackwell has found the Ferrofish A32 saves him much-need rack space which can be in high demand while out on tour.

“A tour I’m going to do next summer calls for some additional pieces of outboard gear. As I continued to look for more outboard pieces for my own setup, potentially getting up to 32 channels into my desk, I would need a 10-stage rack from DiGiCo. The A32 saves space and, more importantly, saves money. As audio professionals, we want all the flashy toys, but if we can get rid of gear to save on the audio budget, we will.”