As a college educator to newbie live sound students, I’m always looking to simplify audio engineering techniques into easy to understand best practices. Whether it’s mixing, system optimization, or stage set up, I try to research available literature, experiment, talk to working professionals, and then organize the information for my students.

The challenge in this effort is that the sound reinforcement industry is highly subjective, and there are many opinions regarding how to complete most any task. There’s simply no correct way to do things when art is involved.

With this in mind, I often present students with what appears to be the most scientifically viable approach, but then offer alternative methods for evaluation. Through critical analysis of contrasting opinions, I encourage students to make their own conclusions.

One subject that I have found difficulty in finding a single best practice is the tuning of front fill loudspeakers. With main loudspeakers typically flown overhead, coverage and clarity in the first few rows of an audience are often less than ideal. Front fills thus become necessary, and a variety of calibration techniques have evolved to smooth the transition from fills to mains coverage.

Depending on venue size and target SPL of the event, a variety of different loudspeakers might be deployed as front fills. In touring applications, larger 2-way boxes and even line array elements might be used to cover the “pit.” In smaller venues where sightlines are a concern, front fills are typically small in size, and may be mounted within the front of a stage or placed on the lip of a stage or orchestra pit.

Ideally, fills should be from the same manufacturer and product line as the mains. Although it’s not mandatory, matching product lines can make the system optimization process go more smoothly, as mains and fills are more likely to share a similar magnitude and phase response. Regardless of the chosen model, front fills are typically EQ’d to match the tonal balance of the mains, and high passed to eliminate low frequencies that can interact with energy from the mains, subwoofers, and stage. 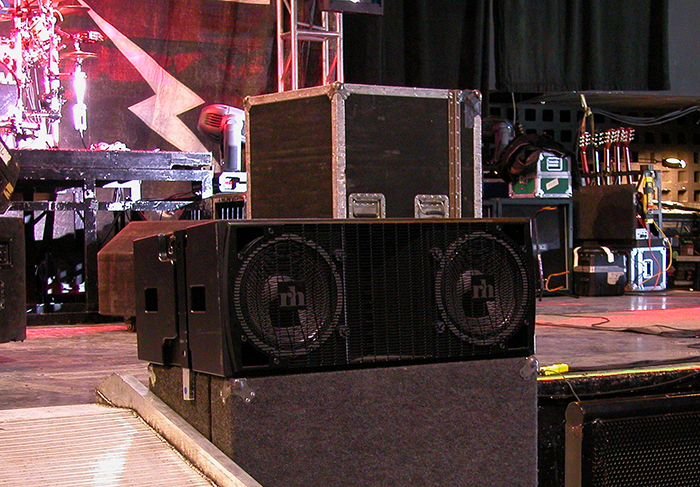 Another important consideration when selecting and optimizing front fills is to ensure they possess headroom similar to the mains system, and that fills do not clip at a lower input level than the mains. Front of house engineers often cannot hear front fills. If the fills are under powered, they may clip and fry while the mains are rocking, and the mixer may never know it. Not only might this sound bad for the front rows, but the issue may not be discovered until another day, when an expensive replacement of drivers is required.

Time alignment and level setting are critical steps in front fill optimization. This is because fills do not work in isolation. Spill from the stage and mains can also be heard in the front rows, and “flamming” or comb filtering may be audible if the system is not time aligned.

Fills are usually closer to their target audience than mains and/or sound sources on stage, and as result, their drive lines are typically delayed so energy exits the fills in sync with the arrival of sound from these other more important sources. Without delay, sound from the fills would meet the audience first, with energy from the stage and/or mains arriving late. Depending on the difference in arrival times, various ugly-sounding issues can arise.

If the difference in arrival between fills and other sources is less than 20 milliseconds (ms), comb filtering can occur. Comb filtering, or combing, is a pattern of peaks and dips in frequency response caused when identical but time-offset signals are intermixed. Combing is typically heard as a hollow or nasal sound and a graphic example can be seen in Figure 1.

If the difference in arrival time between fills and other sound sources between 20 ms and about 150 ms, a flam is heard. Flam is a musical term referring to a grace note, or two notes slightly off in time. Flamming front fills can smear percussive transients and can make drum hits sound doubled.

Making things more complex, the audibility of combing and flamming depends on the relative level of the fills and other sound sources. Up close to the fills, where they’re about 10 dB (or more) louder than the mains or stage, combing and flamming is difficult to detect, as the fills drown out the other sound sources. Vice versa also applies. Further into the audience, at a location where the mains are approximately 10 dB louder than the fills, it’s hard to hear the fill speakers and any combing or flamming.

Eric Ferguson is an assistant professor of Live Sound Production at the New England School of Communications at Husson University in Maine. He also has extensive experience in the studio and with sound reinforcement, including world touring with artists such as Lee Ritenour and James Ingram.
All Posts
ProSoundWeb Top 20
Explore All Top 20 Articles

Insights into overcoming the inaccuracy of quasi-anechoic techniques at low frequencies.

Behind the scenes with the WYWU podcast for a road trip to record interviews in New York in a classic custom van.

2019 Top 20 | #17: Driven To Excellence: Inside The World Of Multifaceted Audio Professional Rebecca Wilson

It’s good for engineers and techs to understand how their equipment works and there’s something special about hand-building it.

Human judgement will always be part of the equation, because the analyzer only knows how to answer certain questions.

Blindly comparing the input stages and A/D converters of two consoles through Dante to see if either actually sounds better.

Product development is a process that begins with an idea or concept, and best ideas always come by way of filling a need.