One of the latest engineers to take the Midas PRO6 out is Paul ‘Pab' Boothroyd, who's midway through the AC/DC Black Ice world tour, with a PRO6 at front of house alongside the vintage Midas PRO40 he's called back into service.

Launched just four months ago, the Midas PRO6 live audio system has already been utilized for a wide range of tours and events around the world.

In fact, the 100th PRO6 has now shipped, and an ever-growing order book is heading towards the next 100, which are being shipped as fast as they can be built.

“We seem to have judged the market exactly right with the launch of PRO6,” says Midas sales and marketing director David Cooper. “We knew during our planning phase that we had a great concept for the second Midas digital system in terms of its superb audio, features set, build quality and price, but the overwhelmingly positive response from both owners and users has surpassed our wildest dreams.

“With other manufacturers focusing on the low end we’re confident we are very well placed to meet the rigorous demands of national and international touring riders, as well as those performance audio installations where good enough just isn’t good enough.”

One of the latest engineers to take the Midas PRO6 out is Paul ‘Pab’ Boothroyd, who’s midway through the AC/DC Black Ice world tour, with a PRO6 at front of house alongside the vintage Midas PRO40 he’s called back into service for this mammoth outing.

“I have found that the sound of the PRO6 is very comparable to the Midas analogues, which is excellent news for us old analog die-hard users,” he says. “Navigation is simple enough, but all in all there is a nice sense of quality about this console, which is why I wanted the PRO6 as part as my set-up on this tour.”

Pogues engineer Paul Scully, who used a PRO6 at FOH for the band’s annual Christmas tour, says, “The PRO6 was so intuitive, especially the EQ. The sound quality is the main thing for me, and I really like the fact that it has the Midas preamps. The band plays a large amount of acoustic instruments, which can sound rather unnatural when using digital technology. 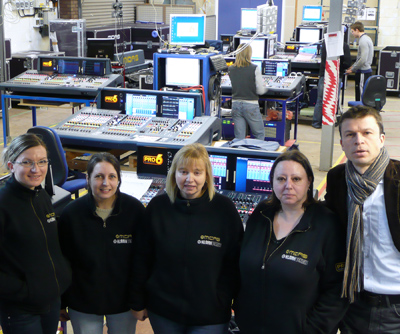 “But with the PRO6, all the instruments sound natural straight away. I also like the onboard compressors; on a lot of digital desks you can see what the compression is doing technically, but you can’t actually hear it.”

Sales of the PRO6 have been particularly strong in the UK, US, Germany, Benelux, France, Greece, Spain, Japan, China, Singapore, Korea and Australia. Many leading rental companies, including Clair Brothers, Thunder Audio, Britannia Row, SSE, Triple Showtechniek and ON-OFF have added PRO6s to their inventories. I

n addition, PRO6 is beginning to feature in installations, such as the three systems ordered by the National Theatre, Athens.

Out on the road, PRO6s have already been out on tours and concerts with AC/DC, Van Morrison, Jan Smit, the Pogues, Marillion, Snow Patrol, Benabar and Eddi Reader, and for the Nobel Peace Prize ceremony, where three systems were networked to two Midas XL8s via AES50.

All Posts
PrevPreviousQSC Rebate Program Extended To March 31: Up To $150 Off For RMX, PLX2 & HPR Series
NextFletcher’s NAMMservations (Or How I Went To Winter NAMM ‘09 And Learned About Drum Stick Free Zones)Next
Top Stories
Explore All Live Sound