Beryllium technology cited as a leading factor in a purchase decision

When a committed prayer group of 10 gathered for the first time in 1996 they set the foundation for what would eventually become one of Jakarta’s fastest growing Christian ministries. Today, Jakarta Praise Community Church (JPCC) includes two locations, more than 7,000 members, and numerous outreach programs helping thousands across Indonesia.

In response to its growing popularity, JPCC recently christened a new flagship worship space. The large multi-purpose facility is located on the 3rd floor of the Kota Kasablanka Mall-a world class shopping, entertainment and tourism center in the heart of downtown Jakarta.

With a growing roster of visiting talent and a dynamic worship service that incorporates all the elements of a rock concert, church leadership sought a top-qualuity sound reinforcement system was essential for the new venue. After an extensive search, a VUE Audiotechnik al-8 compact line arrays were selected as the main loudspeakers for the comprehensive solution that also includes both tracking and mixing capabilities.

“Over the years our church has tried line arrays from most of the major manufacturers, but we’ve always struggled to achieve really good high frequency definition,” explains Pongky Prasetyo, owner of Soundworks Productions and JPCC’s sound engineer since 2003. “Our music incorporates a lot of guitar and synthesizers, along with a vocal style that’s very heavy in the upper-mid and high frequencies. For us it’s crowded at the upper end, and most systems struggle to reproduce this without sounding harsh.

“When I heard that VUE was preparing to introduce a system with beryllium compression drivers, I was immediately intrigued,” he continues. “I’ve had experience with beryllium in the studio and know how much better it is at translating high frequencies.”

Prasetyo contacted Harmoko Aguswan, owner of PT Sarana Generasi Bintang-VUE Audiotechnik’s distributor for Indonesia, who was already familiar with JPCC’s ongoing struggles to find a loudspeaker system to meet their needs. In turn,Aguswan connected the church with the VUE development team.

“When we first spoke the al-8 was just entering the tuning stage and had not yet been announced publicly,” explains Aguswan. “After reviewing the church’s requirements and schedule, the VUE team was confident that the al-8 would deliver the HF performance that JPCC had been seeking. VUE committed to delivering the first finished al-8 system in time for the JPCC’s live recording “One” and anniversary celebration in June.”

“We couldn’t be happier,” says Prasetyo. “Just as I had hoped, the beryllium drivers in the al-8 translate the upper frequencies better than anything I’ve tried before. I no longer have to pull back the 2-5 kHz range. The al-8’s are so clean and accurate that I feel like they can handle anything I send them.”

He also notes being extremely pleased with the output and tonal quality of VUE’s hs-28 subwoofers and was quick to praise their integration with the rest of the system.

“There’s a very realistic quality to hs-28s that’s much more musical than most subwoofers. It’s more than just a punch in the chest. They deliver accuracy at the low that’s the perfect match for the al-8,” he concludes. “From the bottom to the top, the VUE system translates perfectly. Our church couldn’t be happier with the results.” 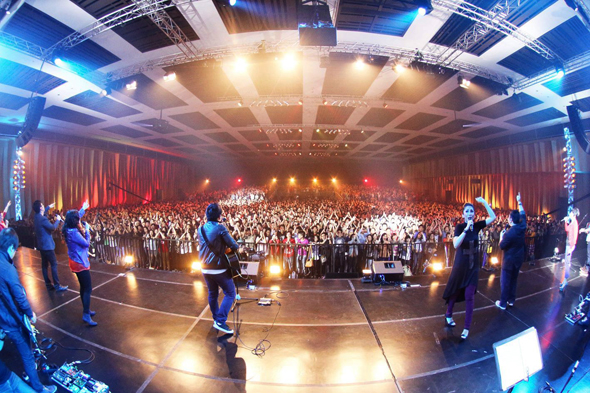