The M-300 V-Mixer is a 32-channel console that possesses many of the features and benefits of the M-400 V-Mixer but in a very compact format.

This fully digital system is built on REAC (Roland Ethernet Audio Communication) and eliminates the bulk and noise susceptibility typically associated with analog snakes and replaces it with Cat5e (Ethernet/LAN) cable.

It is easy to use and sets up in minutes by plugging in one lightweight Cat5e cable from a choice of Digital Snake stage units (up to 80 inputs) making it ideal for portable applications and corporate events.

The system generates superior sound quality by converting analog inputs to 24-bit digital streams at the stage end via high-quality mic preamps located near the source.

The VMixing system then secures the quality of audio signal throughout the complete system path en route to the M-300 V-Mixer, back to any outputs and on to limitless split positions.

The 40-channel assignable output split can be used with the M-48 personal mixing system and the multichannel recording options from Cakewalk.

For existing M-400 or M-380 owners, the M-300 is ideal of an addition monitor or broadcast/record position.

The intuitive interface in the M-400 has been retained in the M-300 making it easy to learn and easy to use. Novice users will also appreciate the on-board help system.

The M-300 V-Mixer integrates with PCs via its Remote Control Software for additional control or sending/receiving setup data allowing users to prepare channel setups and configurations before arriving at the venue. 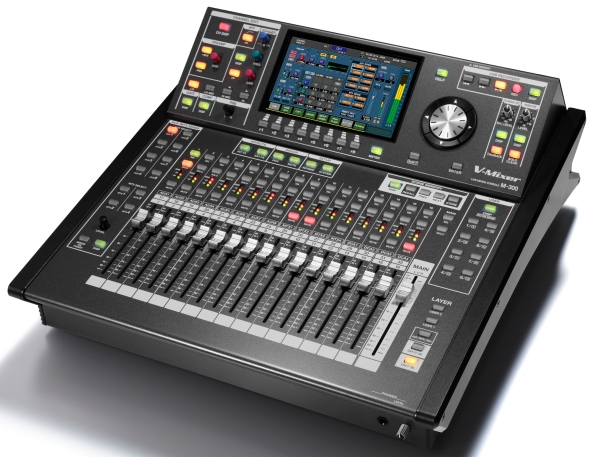