For this location, he decided to reach out to London, Ontario-based audio specialist Tomahawk AV to design an audio system that would meet the specific needs of the new restaurant. Tomahawk AV’s Eric Sidles designed a multi-zone audio system based around Powersoft’s Quattrocanali amplifiers.

From the outset, Sidles knew that he needed pristine audio quality and eight channels of output to fulfill the needs of Ruth’s Chris new Toronto Airport location.

“They wanted to be able to play music throughout the space while having independent control over individual areas for parties or private events,” he says. “So we were looking at a fairly large space with several zones and we needed good clean sound coming out of each one. That meant an amp with a high channel count and plenty of output per channel.” Sidles immediately thought of Powersoft, specifying a pair of Quattrocanali amplifiers for a total of 8 channels of output.

With Quattrocanali providing 300 watts per channel, Sidles had plenty of output to power the 36 Community Professional loudspeakers that he specified for the install. 30 of these were D6 in-ceiling loudspeakers, which provide clear reproduction throughout the restaurant’s interior with minimal visual impact.

The loudspeakers are divided between seven interior zones, which include the main bar area, main dining area, each of four private dining rooms, and the bathrooms. The eighth zone is an outdoor patio, which features CS6 surface-mounted loudspeakers. A Cloud Z8 MK4 controller provides tuning while enabling staff to manipulate volume levels and route input sources independently for each zone.

Powersoft’s efficiency was another key factor in Sidles’ choice to specify Quattrocanali. “They’re very energy efficient, and that’s key for us because Ontario has the most expensive power in North America,” he says. 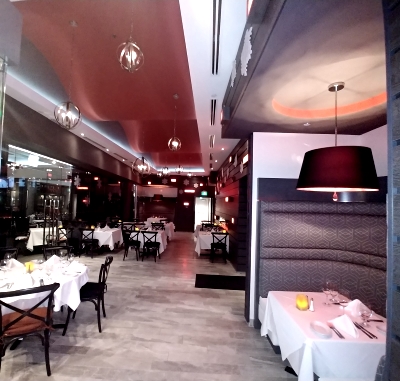 The efficiency is not limited to Quattrocanali’s power draw: their compact rack footprint also enabled the units to easily slot into the restaurant’s modestly-sized gear rack, sharing space with 12 cable boxes for televisions among other components. “They’re very space efficient for their output and channel count at only 2RU a piece, and they don’t put off a lot of heat so you don’t have to worry about overheating your rack.”

For Sidles and Ruth’s Chris Steak House, reliability is king. “It’s a nice restaurant and given how close it is to the airport there are a lot of business travelers and work meetings here,” Sidles says, “so they can’t have their sound system failing on them. With the power supply redundancy Powersoft includes in the Quattrocanali we know we don’t have to worry about failures. They wanted to put something in there that they can leave for 20 years and not have to touch, and that’s what they got with Powersoft.”

The restaurant and JTEK Customs are so happy with the performance of their Powersoft amplifiers at the Toronto Airport location that they are already beginning conversations about the future.

“There are already plans for more locations, and they’re interested in installing Powersoft in those as well as they open,” Sidles says. Sidles himself sees ample future opportunities to specify Powersoft amplifiers for a number of Tomohawk AV’s clients.

“Powersoft is my new go-to amp,” he says. “I choose them because of the reliability, redundancy, high build quality, and flexibility in terms of 8 ohm and 70 volt operation. Most importantly, I just love the sound.”

Primarily for outdoor applications, specific models available in pearly white and currently in stock include the P-6215 (W) and P-3115T (W) coaxial designs and ...read more →