The Green Bay Packers’ Lambeau Field was the first stadium built for the exclusive use of an NFL team, and is the longest continuously occupied stadium in the league.

Recently, on the eve of the park’s 50th anniversary, a massive redevelopment plan was undertaken.

Transforming the venue from a stadium that fans would tolerate a few days per year in order to see their team, to a year-round tourist destination that has been recognized by Sports Illustrated as the No. 1 stadium experience in the NFL, and the eighth-best facility in the world to see a game.

While the stadium’s original classic seating bowl was preserved, the rest of the park’s infrastructure has been revamped, including an audio system upgrade that includes Community Professional Loudspeakers’ WET and R-Series weather-resistant loudspeakers.

According to Mark Plopper of Green Bay-based Made Ya Look Productions, the company behind the audio system design, the Community R-Series had been tested and proven the previous year.

“We had installed the R.5s in the team’s Ray Nitschke Field practice facility last year, and everyone was more than impressed with their performance,” he said. “They thoroughly surpassed our expectations.”

The stadium’s concourse is covered by more than 120 of Community’s R.25 two-way 8-inch weather resistant loudspeakers. As head tech Dan O’Brien explained, the Community loudspeakers solved a persistent challenge in the space. “There’s a tremendous amount of ambient noise along the concourse,” he said.

“It’s a very reverberant space, and you’ve got the sound from the field mixing with the sounds of the vendors, bathrooms and people milling around. The previous system was fine for background music, but important announcements couldn’t cut through the ambient noise.”

The system is configured as multiple 70 volt distributed zones, each covering a dedicated section of the multi-level concourse, with 12 to 14 loudspeakers per zone. QSC PL-Series amplifiers power the system. “The R.25s were so much more efficient that we didn’t have to upgrade the existing power amps,” said O’Brien.

Community’s WET Series W2-312 three-way boxes cover the stadium’s outdoor facade, as well as providing fill within the bowl. And WET Series loudspeakers and subwoofers are installed as part of the Tundra Tailgate Zone, a portable sports bar in the parking area that provides a season-long indoor tailgate party.

Wisconsin’s legendary winters have given the team’s fans a well-deserved reputation for being a hardy breed, and the WET and R-Series loudspeakers’ weather-resistance made them an even more obvious choice. “They’re exceptionally weather-resistant,” said O’Brien.

“Some of those speakers are in positions where they’re out in the weather all the time, and all of them are subject to constant humidity and temperature changes.”

“We checked the R.5s we had installed at Nitschke Field after one of the most brutal winters on record, and they still looked and sounded great,” said Mark Plopper. “We knew then they were the right choice for Lambeau Field.” 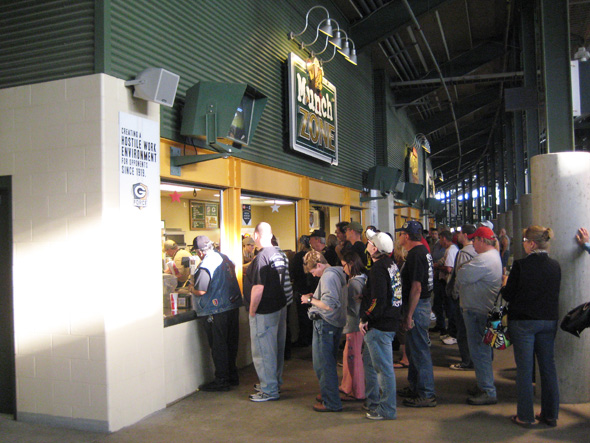