The Commonwealth Stadium recently upgraded the old sound system with Community Professional loudspeakers to meet the demands of the modern audiences.

When Commonwealth was built, most stadiums utilized an end-zone, scoreboard-mounted loudspeaker system. However, to minimize neighborhood noise bleed, consultant Ken Dickensheets of Dickensheets Design in Austin, TX, designed the original system as a central loudspeaker array housed in a unique metal pod. The pod was supported by four large aircraft cables and could be lowered to the ground for service.

This system served the stadium for several decades with voice-range audio. However, modern sports fans and associations like FIFA (Fédération Internationale de Football Association) now expect full-range audio for music and clear announcements that are loud enough to be heard over crowd noise.

Unlike other stadiums, Commonwealth has no support structure for distributed loudspeaker arrays and neighborhood noise bleed remained a concern.

Thus, consultant Fawcett chose to retain the original central cluster design with a new central pod similar in size to the original and a loudspeaker system that would respect the weight limits of the support cables. He calculated that an array of Community R2 loudspeakers would meet these challenges while achieving the stadium’s goals for increased sound level and music quality.

Installed by Allstar Show Industries of Edmonton and completed in early 2014, Commonwealth’s new system utilizes thirty-two Community R2-52 loudspeakers arranged in four circles in the pod and aimed at the various seating areas of the stadium. Under-balcony seating is covered by 107 Community W SERIES W2-218 loudspeakers and other areas are covered by R.5, R.25 and CS4 loudspeakers. Fawcett added a digital mixer and a Q-SYS DSP system and used eight Community dSPEC processors to manage and equalize the loudspeakers.

Fawcett noted, “The Community R SERIES allowed me to meet the stadium’s goals for audio level and quality and still fit within the space and weight limits of the central pod. The FIR filters in Community’s dSPEC made tuning easy and we achieved very even coverage with little or no neighborhood noise bleed.” 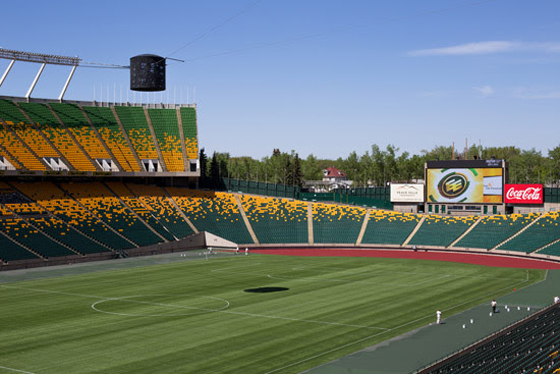