The Evangeliums Christen Baptist congregation Paderborn is a congregational chapel which maintains its own house of prayer in the German city. For the audio system renewal the congregation, together with audio service provider Musik Aktiv Musikequipment GmbH from Paderborn, decided on a new HDL series line array system from RCF.

Musik Aktiv tested several systems available on the market and decided on the HDL 10-A as the most suitable system for this project. The system was planned and designed by the German department of the RCF Engineering Support Group and installed by the community members themselves.

Frank Schallenberg, owner of Musik Aktiv, on opting for RCF: “For this project, we use RCF because we appreciate the competent support from their sales department. A decisive point we have experienced with many other projects already installed. The RCF engineers are very conscientious and detail-oriented in all they do plus the quality of the components, no matter in which category, is very high. When using RCF equipment, we experience practically no complaints or repairs. If there should be a difficult situation, the flexibility of the RCF team always gives you the feeling you are in good hands.”

The church’s house of prayer has existed since 2004, holds 600 people and is the center of the church community. The previously installed audio system was outdated and had to be replaced. Therefore the community decided on installing a completely new system using a modern line array from RCF. 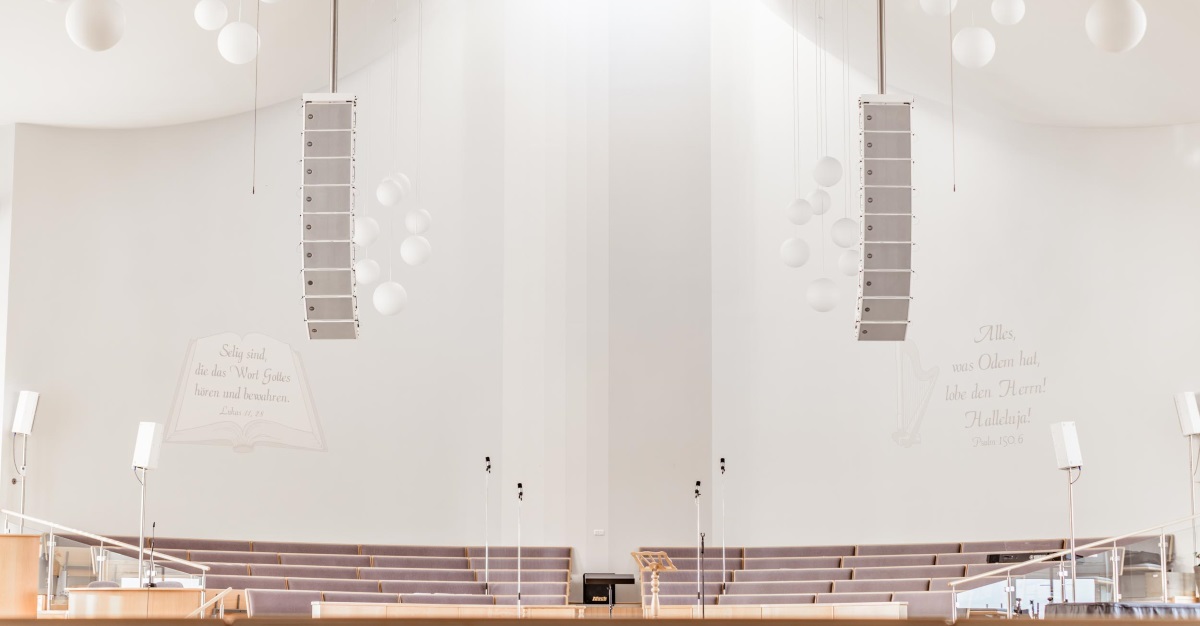 The HDL 10-A is an active 2-way system and is installed as a stereo full-range line array with 2×9 modules, hanging from the ceiling. Since multicore cabling already existed in the house of prayer, the decision to use RCF’s active HDL 10-A plus the construction work was easy in terms of cabling. The previous system was installed located in the middle of the ceiling. For the new RCF system the team opted for a classic outline with two curves located to the right and left of the stage to achieve better coverage. Special suspensions were installed in the ceiling to mount the line arrays.

During the liturgy, the congregation stresses particular importance to choral support of the sermon. Therefore, great attention was paid to audibility and sound characteristics at various positions within the hall. Besides the sermons, choirs, orchestras and further musical contributions are an essential pillar of the services. Furthermore, all sermons are recorded and later made available as audio files for download if parishioners weren’t able to attend. A simultaneous translation of the service in the Russian language is available for the parishioners.

During installation and calibration of the system, structural conditions such as balconies and different surfaces had to be taken into account. In such demanding environments, the HDL 10-A offers many adjustment possibilities regarding radiation angle or coverage – quickly to implement using the RCF Shape Designer. The active 2-way system is reliable, especially in fixed installations, and offers 1400 watt peak power leveraging the integrated, efficient digital power amplifier.