A significant part of the new sound system includes 20 channels of 2.4 GHz wireless microphones, all drawn from the MIPRO ACT 2400 Series catalog, which is distributed throughout North America by Avlex Corporation of Kansas City, MO.

Cincinnati-based Tri-State Audio-Visual Company was contracted to design and deploy the new sound system at the Queen City Metro Conference Center. Bruce Bock, the company’s president, handles both sales and system design for his company. After consulting with SORTA management to determine the requirements of the project, Bock deployed twenty channels of MIPRO wireless microphones—utilizing ACT-24TC 2.4GHz digital bodypack transmitters and BC-100 wireless boundary mics, used in conjunction with MM-202B gooseneck microphones on the transmitting side of the equation. 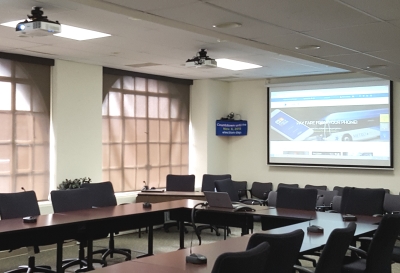 On the receiving end, Bock and his team deployed five MIPRO ACT-2414A 2.4GHz quad-channel receiver systems plus a MIPRO AT-24 2.4GHz receiving antenna placed above the room’s drop ceiling to aid with signal reception.

“We were called to replace 12 existing wired gooseneck microphones,” Bock explains. “Originally, we were going to go use just the BC-100 boundary mics, but the facility’s HVAC system and the way it was configured made it really unfriendly to boundary mics. This forced us to re-evaluate the choice of equipment and, with help from the Avlex team, we came up with a solution that incorporated both the ACT-24TC 2.4GHz digital transmitters and BC-100 wireless boundary while adding the MIPRO MM-202B gooseneck mics.”

MIPRO’s BC-100 boundary mic is designed to house the ACT-24TC 2.4GHz digital bodypack transmitter—thus creating a wireless boundary microphone. With the addition of the MIPRO MM-202B gooseneck microphone, the system transforms into a wireless gooseneck microphone system, making it an excellent choice for boardrooms, conference centers, schools, government facilities, houses of worship, and other installed sound applications. This is the solution that Bock and his team deployed at the Queen City Metro Conference Center.

“We installed the goosenecks and it all worked perfectly,” Bock reports. “After hearing and seeing how well the MIPRO equipment worked, the CEO then asked if we could add another 8 mics. I checked with Avlex and was told about the other available frequency sets that could be used. We took another receiver to the location, tried it and it worked perfectly. We were initially concerned about the high channel count and RF interference because the conference center is located across the street from the Federal Building, which has all sorts of wireless equipment in use. Even with all the RF frequencies in the immediate area, the 20 channels of MIPRO equipment performed beautifully—free from any interference at all.”

With the plethora of 2.4 GHz wireless technologies in use today, the possibility of RF interference is a common challenge when deploying wireless microphone equipment—particularly high channel density applications in metropolitan areas that must contend with routers, WAP’s, radio, shortwave, cell service, and a multitude of additional wireless technologies. Because of this, questions routinely arise during installation of wireless systems. Hence, quality customer and technical support services are crucial. In this regard, Bock rates Avlex’ support services best in class.

“When we were asked to add the additional mics, I was concerned about the possibility of RF interference, so I contacted Todd White, our Avlex / MIPRO distributor. He, in turn, went to Fred Canning at Avlex who took the question to MIPRO engineering. They came back with the answers within 48 hours, telling us how to configure the various settings. I was very pleased with the way our concerns were addressed.”

The Queen City Metro Conference Center’s new sound system was installed during March 2018 and was placed into service immediately. Since that time, Bock reports his client is very pleased.

“There was a major Board meeting recently that used all the microphones. Our customer called and said everything went perfectly. Everyone was pleased with the quality of the sound and the system’s ease of operation. I chose the MIPRO product because the customer was looking for a solution at a price point that wasn’t prohibitive. The acid test was the day we installed and turned everything on. The customer was in the room when we made all the mics hot for the first test. Everything worked—no interference, no crackle, and no buzz. The equipment just came on and worked flawlessly.”