After a comparison, the d&b V-Series system driven by the newly developed 30D and 10D amplifiers was chosen for the upgrade.

“The cost always has to be one of the decisive factors when one is contemplating a sound system installation,” opens Jung Hawon, one of the elders in the Apgujung Kwanglim Church and chairman of the Broadcasting Department.

“The opportunity to use the brand new specialized installation amplifiers, the 10D and the 30D, from d&b audiotechnik meant that the savings, when compared to other quotations, were more than persuasive.”

That said Hawon was very thorough when determining which system demonstration met with his congregation’s approval. A group from the eighty thousand strong global worshippers were provided with a form of grading sheets so they could rate the three systems vying for the contract.

The d&b V-Series system, augmented by some E8 loudspeakers and driven by the newly developed 30D and 10D amplifiers won the day.

Not simply content with the democratic vote, Hawon did some independent investigating.

“Before making the final decision, I researched and visited some of the churches and arts centers where d&b systems have been installed. Without exception, they were all very satisfied with the quality of the sound, the after sales service and the supportive attitude of d&b audiotechnik Korea. I felt very confident that we were making the right decision from a quality point of view and extremely fortunate that we were able to acquire the same quality as these other venues but at a lower cost due to the new amplifiers.”

Originally constructed in 1978, the Apgujung Kwanglim Church in Seoul (there are other Kwanglim Churches in various locations worldwide) was designed to accommodate the sound from the huge organ that dominates the stage to this day.

The marble pillars left and right of the stage, the enormous floor to ceiling stained glass windows, the polished wood walls and the extensive balcony that protrudes long and low over the floor seating, all contribute to a space with a plethora of acoustic challenges, as Hawon himself recognizes.

“Our church has historically suffered from awful sound; low intelligibility and very reverberant sound due to the acoustics of the worship space which was designed for the more traditional style of Christian worship, with pipe organ accompaniment. Of course, times have moved on and we now offer different styles of worship to suit all generations: traditional including choir, organ music and sermon, and contemporary with band music and sermon. Our Sunday services are broadcast to other countries, such as Japan and France, so it is not just three thousand eight hundred worshippers in the hall who hear us.”

Hawon clearly understood there would be many hurdles to overcome, and spoke to Kevin Kim at d&b audiotechnik Korea for advice.

“I explained that the new amplifiers can deliver ArrayProcessing to installed line array systems, so in addition to the cost saving, the church would still have access to the features available on the more familiar D20 and D80 amplifiers,” comments Kim.

“The 10D is for the E8 loudspeakers and the 30D for the V-Series including the V-SUBs and J-SUBs on the specification. Between them the two models cover almost all install applications and the comprehensive DSP capabilities can accept new updates from d&b firmware making them future proof investments.”

Once the hardware was installed, d&b Regional Application Support and Education manager, Gert Sanner visited to help set the system up.

“This was quite a tricky task with all the acoustic challenges. Once all the measurements were acquired we went onto setting up ArrayProcessing on the 30D amplifier – for the first time ever. I have to say it sounded pretty special. The balcony that previously used to be a little loud at the front now featured a very even coverage and we achieved tonal balance in the whole auditorium.”

And the end result from Kwanglim’s perspective?

“Before the installation, my hope was that changing the system to d&b would produce a positive improvement and create a more immersive worship experience for the whole congregation, regardless of worship styles,” says Hawon. “I can honestly say that my expectations have been surpassed. The entire congregation, staff and ministers are very satisfied.”

“I was fortunate enough to get the chance to hear before and after applying ArrayProcessing,” Hawon concludes. “Even though I don’t consider myself to be an expert, I could clearly hear the difference. To me, this means that worshipping experiences can be identical regardless of seating locations. I believe d&b audiotechnik describe this as ‘democracy for listeners’.” 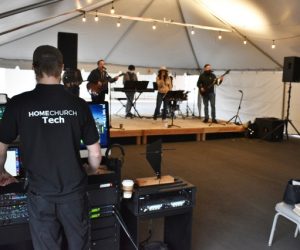