Originally built as a cinema in the 1930s, The State Theatre in State College, PA eventually fell into disrepair but has been revitalized as a community arts center in a process that began in 2006 and continues to present with the recent implementation of a new sound reinforcement system headed by Electro-Voice X1 line arrays powered by Dynacord IPX amplifiers.

The original venue closed in 2001, and to save it, concerned local residents formed a non-profit group to acquire and refurbish the historic building, that now hosts concerts, theater, dance and movies, as well as education and worship events.

State Theatre production manager Augie Petaja oversaw the design and installation of the new system, which he describes as long overdue: “Our existing PA system just didn’t provide the coverage or headroom that this venue deserves, and some elements were no longer serviceable. So once we had the funding, I created a criteria list for the upgrade.”

The goal was to deploy an effective system that would work with the theater’s budget and existing infrastructure, and last at least 15 years. Petaja engaged a rigging consultant to determine how much weight the beams could handle, then invited proposals. After auditioning several systems, the venue selected the Electro-Voice X1 (12-inch, 2-way design) from the X-Line Advance line array series.

“We listened to a lot of brands, usually in other venues due to our busy production schedule,” Petaja states. “I drove to Pittsburgh to check out the X1 at an outdoor festival so I could see it being flown and then hear it during the sound check. I also brought my own music to listen to as a reference. I came away really impressed with the capability and sound quality of the system. When it came time to make a decision, the X1 was our clear choice.”

For system design and installation, the theatre engaged Chris Kepler Audio Services, an area Electro-Voice dealer who is familiar with the venue and worked directly with EV on the design. “We submitted all the room measurements to EV to make sure we had the right dispersions, fly points and angles,” notes Kepler. “Once we had it installed, EV sent out their applications engineer to help tune the system. They’re just a great company to work with.”

The system consists of twin X1 arrays, each with six 90-degree boxes over three 120-degree versions. Bass support is delivered via two X12-128 dual-18-inch subwoofers hidden beneath the stage plus two of the new X12i-128 install version of the subs flown above the center-front. All loudspeakers are driven by four Dynacord IPX20:4 amplifiers and controlled via SONICUE software.

“Ideally, we would have put all four subs beneath the stage, but there just wasn’t room,” explains Petaja. “Fortunately, the flying version (X12i-128) became available just as we were doing the installation. In fact, ours might be the first ones out there.

“This is a great room acoustically, and the X1 system accentuates that,” he concludes. “We’ve had nothing but positive reactions. It’s rider-friendly, the patrons love it, and we’ve had great reactions from touring techs. We couldn’t be happier.” 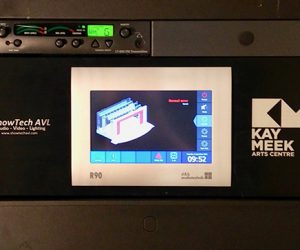