Over the past 18 years, more than $20 million has been poured into restoring Shea’s Buffalo Theatre in Buffalo, New York, one of the few remaining Tiffany-designed theaters in the country.

The 1926-vintage former silent movie venue and vaudeville house is one of three theaters that make up the Shea’s Performing Arts Center. The main theater and in the Grand Lobby are integrated over a Dante network, accessed using Attero Tech unD6IO Dante-enabled audio wall plates.

The unD6IO provides two analog XLR inputs with switchable mic/line gain and phantom power and two unbalanced inputs that can be switched in software between RCA and 3.5 mm stereo jacks. The two analog output channels feed a 3.5 mm jack and two balanced outputs on a side-mounted, de-pluggable connector with software-controlled volume.

“We revamped the main sound system and put in a lobby system where none existed before,” offers project manager Chris Dietrich of AV engineering firm Specialized Audio-Visual (SAVI), which designed and installed the system. “We gave them one of the nicest lobby sound systems I’ve put in anywhere, and a big part of that was Attero Tech Dante wall plates. In an old building, it’s not easy to get conduit retrofitted. It’s much easier to take a piece of plenum-rated CAT5 and wiggle to locations that you couldn’t easily get to running a lot of analog pairs. With Dante, I can take one CAT5 cable, plug it in with a PoE switch at one end, and provide analog on and off ramps with Attero Tech Dante interfaces.”

The stately, marble-clad Grand Lobby hosts weddings, receptions, concerts, and other events, some of which also utilize the main theater. Because Shea’s is the anchor of the downtown arts and entertainment district, it’s the venue for the annual coordinated season opening, complete with press conferences and other functions, including a band on the balcony of the Grand Lobby.

“With the new system, they can plug mics into a submixer and run the output of the mixer into an Attero Tech unD6IO wall plate,” Dietrich reports. “The unD6I0 brings the audio into the Dante network and to a BSS 806 Dante-enabled DSP. We put unD6IOs in strategic locations to provide multiple spots with input into the lobby sound system, and they are the on and off ramps for all signal exchange to and from the network. From the DSP, audio flows to the rest of the lobby sound system and also into the main sound system in the theater because the theater and lobby systems can share audio back and forth over the network.”

Given the painstaking restoration of this historic building, one of SAVI’s biggest challenges was keeping the sound system as unobtrusive as possible.

“The first question they asked when we looked at the main theater in initial discussions was, “you’re not going to put any more holes in the roof, are you?” chuckles Dietrich. “We were very constrained where rigging points could go, and we had to get creative in our rigging. It was the same thing in the Grand Lobby. Theaters of this type have a historic preservation director and staff, and we worked hand-in-hand with Shea’s restoration consultant Doris Collins. We started with custom-colored speakers that pretty much fit where they were going to go, and then Collins customized the paint work to make them blend in as well as possible, with a full marble finish when appropriate.” 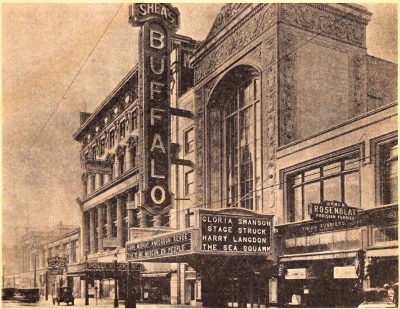 The Attero Tech unD6IO wall plates offered the SAVI team an unobtrusive, relatively small footprint. As with the loudspeakers, the unD6IO faceplates were custom-painted to match the marble in the lobby.

“I didn’t need to put a big box on the wall with a bunch of XLR connectors on it and a door and all that,” Dietrich explains. “I just put a few unD6IO two-gang Decora wall plates up, they could paint it however they wanted, and we have all the connectivity we need. I don’t even have to run a big conduit to get there. With Dante, we don’t need a bunch of analog infrastructure. We use a single CAT5 cable and eliminate a lot of wiring, termination, conduit, and labor, saving our customers a lot of money in the process. At the same time, we are able to meet the customer’s aesthetics requirements.”

The unD6IOs proved to be just the first sets of I/O for the lobby. “Now they’re in the process of expanding their input options in the lobby,” Dietrich reports, “and I’m getting ready to install some Attero Tech flange-mount interfaces. Overall, this project is a perfect example of how a Dante network using Attero Tech interfaces offers multiple benefits.”

All Posts
PrevPreviousSubwoofer Interactions – Avoiding the “Power Alley”
NextChurch Sound: Being Open To Suggestions To Improve Your MixNext
Top Stories
Explore All Install