Inducted into the Rock & Roll Hall of Fame in 2004, ZZ Top—long comprised of the classic trio of Billy Gibbons, Dusty Hill, and Frank Beard—is celebrating its 50th anniversary by currently trekking through a world tour that runs into mid-October.

As a thank you to its fans in Texas, where the band got its humble start back in 1969, the tour kicked off with three consecutive shows in the Lone Star state, all of which were reinforced by Houston-based LD Systems with a long throw L-Acoustics K Series loudspeaker rig.

Sharing the bill with Bad Company, and joined by opener Cheap Trick, ZZ Top performed to full crowds at Dallas’ Dos Equis Pavilion, Houston’s Cynthia Woods Mitchell Pavilion, and the Austin360 Amphitheater in May, prior to heading to Europe. 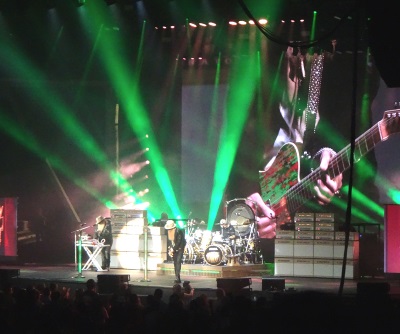 LD Systems audio crew chief and systems engineer Julian Gates, who expresses his appreciation for Soundvision’s new Autosolver tools, created the system design for the shows. “It’s amazing how close Soundvision can get to automatically setting up the final system arrangement using Autosplay and Autofilter,” he describes. “Once the initial tuning was done, I walked the venue and was impressed by how consistent the venue sounded from front to back. It’s almost scary how close it gets to the final setup.”

As anyone who has done outdoor shows in Texas will tell you, the temperature and humidity in these spaces can shift dramatically within minutes. “Thankfully, using the P1 probe and new Autoclimate function in LA Network Manager, we were assured a consistent sounding PA no matter what the weather was doing,” he adds. “That was a real lifesaver. L-Acoustics has always been good at providing an amazing product, but the combination of P1 and the Autosolvers takes K1 to a whole new level.”

Gates notes that all of the concerts sounded great under the very capable mix of front of house engineer Jamie “J-Mo” Rephann, who has also worked with Jane’s Addiction, AFI, The Mars Volta, 311, and others: “Although ZZ Top hasn’t properly toured with L-Acoustics systems in the past—I believe they had only done some one-offs with K1, including using our system at RodeoHouston a few years back—J-Mo’s mix sounded fantastic and he really loved the sound he was getting out of the rig.”

Rephann concurs, “I had a amazing time mixing those shows,” he says. “I first used V-DOSC in 2000 and loved it, so I’m always happy when I see K1/K2 on a show day. The coverage with the new software is stellar, and the humidity adjustment feature is great as well. K1/K2 always sounds beautiful and I would gladly mix on it daily, no problem—especially with Julian as my systems tech. He did a perfect job of tuning the rig and I couldn’t have been happier with the results.”

The loudspeaker setup for the Dallas and Austin shows comprised 12 K1 enclosures over four K2 per side, with eight K2 per side flown for outfill coverage. Twenty-four SB28 subs end-stacked in six groups of four delivered the low end, while six double-high stacks of Kara were positioned on the subs and stage for frontfill. The Houston show featured a slightly smaller deployment of mains enclosures to better suit the venue’s layout, while 10 SB28 per side end-stacked on the stage wings served as the sub complement.

The monitor package for all three shows consisted of 14 115XT HiQ wedges, two ARCS II over two SB28 per side as sidefills, and two SB18 as drum subs. A total of 45 LA8 amplified controllers powered all systems—36 for mains and nine for monitors—while mains were managed and processed by a pair of new L-Acoustics P1 processors at the FOH mix position.

“J-Mo texted me a very nice compliment after the shows telling me that my tuning was impeccable, and that’s why his experience was so good,” Gates shares. “But some of that credit certainly goes to L-Acoustics, which has created a system that makes it easier than ever for techs like me to set it up and tune it. Also, with the clarity and throw that L-Acoustics provides, no matter where you are in the venue, you always feel like you’re sitting in the best seat. I’m a big fan of the brand and believe that any artist can only benefit from using their gear.”