Established in 1989, the Zentrum für Kunst und Medientechnologie | Center for Art and Media (ZKM) aims to “continue the classical arts into the digital age.“ To this end, it specializes in theoretical and practical research, technical development and artistic production, and has recently installed a Lawo mc²56 mixing console in the Kubus at its Hertz Laboratory.

The ZKM Hertz Laboratory is dedicated to the performance and recording of experimental music and musical experimentation, including multichannel sound reinforcement. Its Kubus (Sound Cube) is specifically designed for audio projects using IP-based audio technology.

Currently, 51 loudspeakers are in use in the Kubus. Based on RAVENNA IP technology, the Lawo mc²56 audio production mixer replaces an outdated digital mixer that was no longer able to meet the demands of these ambitious tasks. With 32 faders and three DSP boards providing 144 fully equipped DSP channels, the mc²56 brings artistic freedom to demanding productions and performances.

Located on a former industrial site in Karlsruhe, Germany, the main activities of the Hertz Laboratory are artistic production and media technology research. Here, contemporary artistic/scientific concepts such as augmented reality in AR and VR applications, artificial intelligence, immersivity and sensor-supported environments are explored, alongside the of artistic options in the electromagnetic field. This research spans different media and genres, and is implemented in artistic productions. 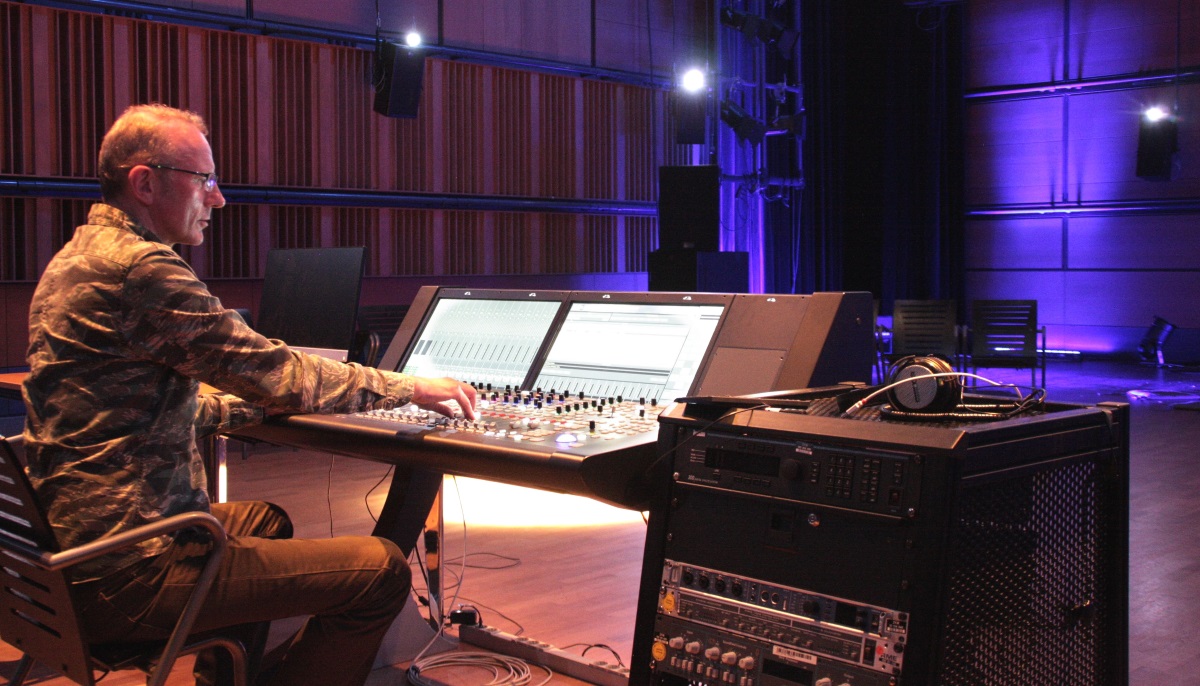 The new mc²56 console is equipped with 24 microphone inputs and 72 line outputs to fully exploit the potential of the complex Kubus immersive sound system. In addition, it offers local inputs/outputs and four MADI ports. An additional Lawo A__madi4 unit is used for the remote connection of two further MADI ports via RAVENNA.

“ZKM had previously used Lawo mc² consoles that were hired in for concerts with special requirements, allowing ZKM sound engineers and artists to become familiar not only with their sound and technical aspects, but also their concept, application and user-friendliness under real conditions,” explains Ludger Brümmer who, in addition to being an instrumental and electroacoustic music composer, is head of the Hertz Laboratory at the Zentrum für Kunst und Medientechnologie. “These opportunities demonstrated that the new mc²56 with its all-rounder qualities is ideally suited to our wide range of tasks.”

The multitude of DSP channels requires management of a vast number of signal paths. The configuration of the prior console with regard to aux buses and sound paths had become increasingly complex with in response to the growing requirements of the projects it handled. The new Lawo console offers not only an intuitive configuration from a single source, but also an integrated matrix. This gives ZKM sound engineers flexible routing and bus management, which makes the management of audio channels considerably more efficient. A control matrix for flexible and fast intercom is also integrated, eliminating the need for a separate intercom system.

“The console is self-sufficient in its routing, so we were able to eliminate the old audio router,” states Ludger Brümmer, explaining this important advantage of the new Lawo system. “It was crucial for the decision that the mixing console for our Klangdom (Sound Dome, dedicated to sound spatialization) could control and manage all output channels – our chamber orchestra performances often require 20-to-30 microphone channels. It also needed to be able to operate at 96kHz – even if this is rarely necessary, the Klangdom should at least be able to produce HD formats”.

Direct connection of the Lawo system to the facility’s Pyramix DAW allows control of the mixing console remotely via MIDI. Sound engineers can use this combination to control all microphone preamplifiers via touch display, and record directly via the core without a local console.

The ZKM is fully equipped with a fiber-optic infrastructure, allowing the Lawo Compact I/O unit that is also available to be flexibly positioned and used throughout the facility – so that, for example, signals can be taken from different locations for small events and mixed in the control room.

“Our musical and arts events sometimes involve up to 200 artists who perform their music and sound in two concert rooms. These events often last several hours, and present us with unpredictable challenges, especially as there is hardly any time for rehearsals before the concerts. The engineer at the mixing console must be able to react very quickly. Thanks to our experience with the hired consoles, we know that Lawo consoles can be operated quickly and intuitively, and react with lightning speed,” proclaims Brümmer.