Gand Concert Sound (GCS) of Glenview, Illinois recently utilized a Nexo Alpha sound system on the top of the Wit, one of Chicago’s trendiest hotels.

The penthouse open-air bar, called Roof, was turned into a rock club with music by 80’s new wave rockers ‘Missing Persons’ and 90’s power pop headliner ‘Letters to Cleo’, whose lead singer, Kay Hanley, is best known for providing the movie voice of Josie in ‘Josie and the Pussycats’.

“Thank goodness the PS10s deliver so much SPL in such a small footprint. To my surprise, I was asked to bring some channels down in the monitors!”

Crew chief Gary Gand said, “This venue has a very posh concrete and steel bar, which we put staging over, and lots of high-style decoration, such as glass walled fire pits and spandex umbrellas that were not production-friendly.”

We were walking on egg shells all day to make sure we could rock the crowd in a totally safe way and without risk to the decoration.”
The biggest challenge of the set up, said Gand, was the sophisticated roof tile drainage system. “The entire patio is ceramic tile floating on plastic and rubber so when it rains, the water drains through the floor onto a membrane roof underneath.”

“We opted to pull the tiles in places where weight would be concentrated, and stack cabinets and staging directly on plywood over the membrane.”
Said Bob Murr, GCS front of house engineer, “The Yamaha LS9-32 is great; I used entirely onboard everything: EQ, comps, gates, ‘verbs, and delays.”

“Despite not getting power to our distro from the venue until the absolute last second, I was able to sneak some AC from an inside bar, did all my pre-programming and saved it, before sound check.”

“The compact size of the console helped with hoisting gear up to the rooftop, and fitting in a small corner⎯ ❐ ⤬nearly off of the roof!” 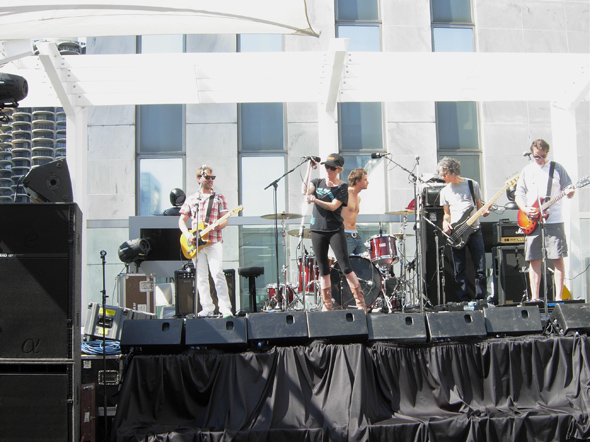