Working Sound Reinforcement In The Wonderful World Of Celtic Music

It is not usual to encounter an entirely new musical genre, nor is it unusual not to have a clue what to do with it.

And that’s exactly what some in the live audio community are encountering with the burgeoning Celtic music scene.

Irish and Scottish immigrants brought their traditional folk music with them and several generations later, it morphed into bluegrass in Appalachia and spread all over the south and east.

Somehow, most folks missed the fact that it came from across the water and assumed it was born here.

All that is changing, as is Celtic music itself. The Celtic community has always had its traditional folk music but only small samplings of it ever leaked out into the general public.

The change started in the British Isles with the folk revival of the mid 1970s and finally made its way to the US when, in 1995, Riverdance exploded onto the scene. The American public had never heard (or seen) anything like that before and tens of thousands of people really, really loved it.

It captured the imaginations of young girls who flocked to the dance studios to learn how to step dance. But more importantly, it gave musicians all over America something new and fresh, which they’ve now taken to their hearts and made their own.

There is something for everyone in the Celtic genre, which I break down into five categories: traditional folk music, bluegrass, balladeers, rock, and pipes and drums. 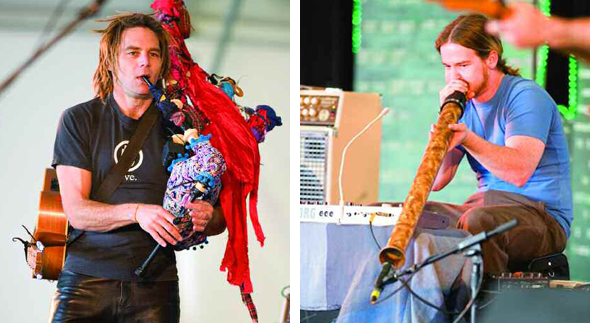 WHAT TO EXPECT
As these festivals multiply, it becomes more and more likely that audio engineers will be exposed to it for the first time, and thus it might be helpful to know what to expect and how to approach Celtic music.

We worked our first Celtic festival in November of 2001, when we were hired to do their main music stage because we had a reputation within the regional bluegrass community for knowing the difference between electric and acoustic instruments.

The festival was a real eye opener for us. There were a number of instruments we’d never seen or even heard of before. And how the heck do you mic a bagpipe?