More centrally on stage there’s also a Roland SPD-SX drum sampler for Mayberry, positioned on a skid so that it can come on/ off the stage as needed. It’s output on a stereo pair into the Radial 8-channel DI on Doherty’s stage left riser.

“That then comes along to the playback racks, but isn’t processed through the Focusrite and Abelton path because of latency,” Simpson adds, “so instead goes directly to the Klark Teknik split to FOH and the X32.

“I’ll go through the playback racks in order,” he continues. “At the top we’ve got a Black Lion Audio Micro Clock MKIII feeding wordclock to the other units. Then there are two Focusrite OctoPres, which handle the synths, then the RME A/D M32, and then the two RME Madiface XTs. Also I’ve got some MIDI hardware in there – M-Audio Midisport 2×2 interfaces and a Kenton Merge box. That’s all run from a MacBook Pro connected via Thunderbolt using a Matrox MX02 Thunderbolt adapter, which converts Thunderbolt to EPCIE connections and connects to the RME Madiface boxes.”

Favoring The Analog
Playback is done via Abelton, but not the most recent version, Simpson notes. “Upgrading is a mine field, in my opinion. Until we have a significant amount of rehearsal time I’m not upgrading my OS or Abelton. Before this I worked in IT and I know that you don’t upgrade until you have to. Upgrades, I feel, are some kind of evil temptation.” 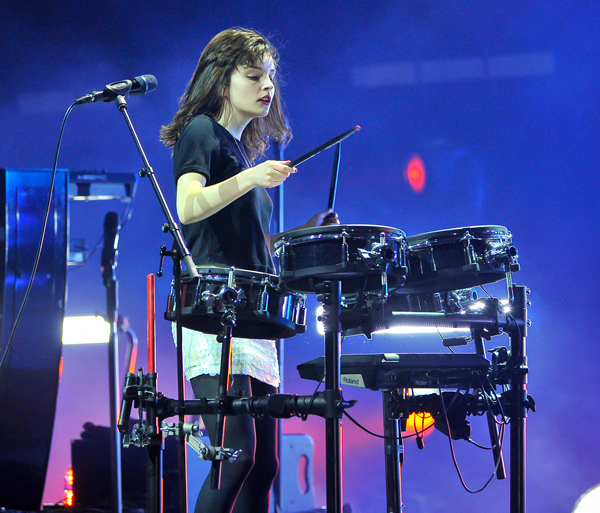 The multitalented Mayberry contributing percussion, with a Sennheiser e965 condenser mic on hand for her lead vocals.

Both Cook and Doherty also play Roland A-800 controllers. “The main MIDI run is for the two A-800s, and the AKAI MPD 226 come into Abelton and run into MOTU MIDI XTs on each riser,” Simpson details. “The output from the A-800s goes into that and comes along another MIDI XT in playback world, splitting the signal to each instance of Abelton and the A and B rigs to maintain redundancy. That’s coming in through the MIDI connection on the XT, which cuts down on the amount of hardware that we’re using.”

In previous iterations, the band relied on a variety of soft synths, but Simpson points out, “One of the things we were all keen to do was to remove soft synths from the equation. Chvrches’ thing is using hardware synths. They favor analog sounds and so were eager to get rid of soft synths from an aesthetic and reliability point of view.” That said, the band still uses an Abelton drum rack running Simpler and Sampler controlled by an Akai MPD 226.

From the stage, Cook and Doherty use iPads to control playback and change song scenes. “The iPads come down a MIDI out into the Kenton MIDI merge box and go to the M-Audio midisport interfaces, which connects to Abelton,” Simpson says. “The great thing about the iPad is that the interface is customized in the way that Iain wants; with MIDI feedback coming over Sysex telling him the name of the song and the section of the song, so he can see an overview of where he is in a song.”

There have been occasions when a switch from system A to backup system B was necessary, but Simpson adds that the switch was so seamless he didn’t notice until realizing one of the synths was on the wrong patch. “Because of the way the MOTU XT is set up, it needed to be switched manually so the program change hadn’t fired,” he explains, also noting that there’s a also a backup system C, completely separate from the audio flow, for use only if something goes seriously wrong with the RME hardware. 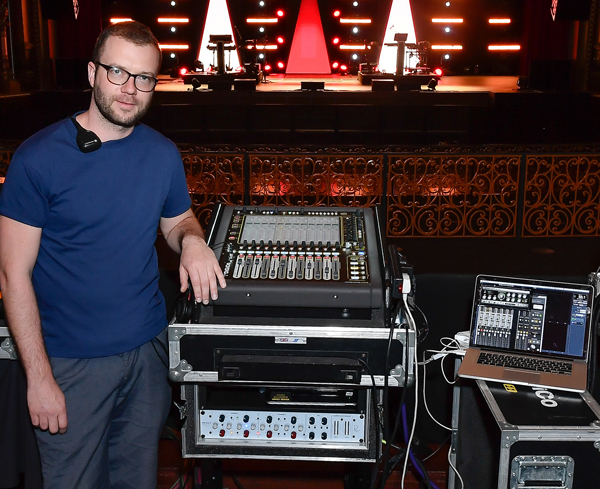 It’s a compact footprint for front of house engineer Paul Gallagher as well, centered upon a DiGiCo SD11i and Waves Impact Server.

Meanwhile At FOH
Front of house engineer Paul Gallagher notes that his part of the equation is more straightforward: “Keeping the band loud and getting vocals on top of everything.” His approach to mixing Chvrches is keeping the sound as faithful as possible to the band’s records while getting their live energy across.

He works with a compact DiGiCo SD11i digital console hosting Waves plugins that run on a Waves Impact Server. “When we chose the SD 11i, I had a few consoles in mind and looked at the smaller consoles offered by several companies,” he says, “but the reason we went for the SD11i is the ability to run the Waves server and also have a remote stage box. Specifically, we chose the D2 rack on MADI BNC that allows a 100-meter run from the stage to front of house.”

Gallagher also makes use of a Rupert Neve 5045 primary source enhancer, UAD Apollo Twin running Lexicon and Roland effects and an Eventide H9 Harmonizer multi-effect-processor. While most venues on the tour proved well-stocked in terms of house systems, at times he ordered extra subwoofers to attain the desired low-end impact. 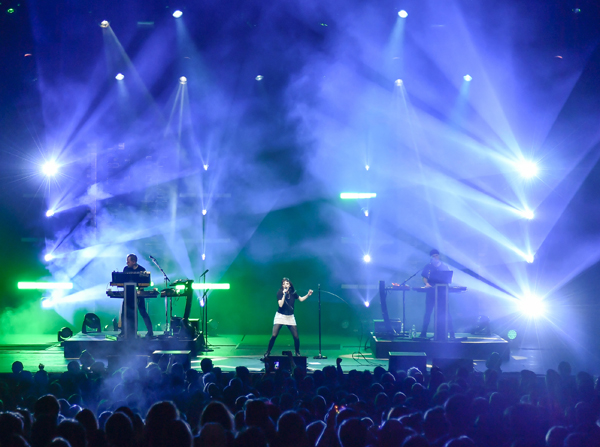 Mayberry’s lead vocal is captured with a Sennheiser e965 condenser mic that’s hard-wired, and she switches to an e965 capsule on a Sennheiser 500 Series transmitter when she wants to move around. For Cook and Doherty on backing vocals, the choice is Sennheiser e935 dynamics. Doherty also utilizes an e965 on the occasions he takes lead vocal duties. All of the mics are split three ways via a Klark Teknik Square One splitter, going to FOH (D2 rack), the X32 for monitors, and broadcast when needed.

Overall it’s a truly unique setup, one the band was at the core of in terms of its development. “They’re extremely technical – the whole design, that’s their vision and how they want the show to work,” Russell concludes, adding that it helps everybody with their jobs. “It’s brilliant. They are very hands on.”