Both Shure and Sennheiser microphones were utilized in abundance at the recent 44th Annual Academy of Country Music (ACM) Awards show, which was broadcast on CBS from the MGM Grand Garden Arena in Las Vegas.

ATK Audiotek provided production for the show, with monitor mixer Michael Parker working alongside Robert Brogden, who handled all of the wireless personal monitor assignments for 16 stereo mixes and 32 receiver packs.

– Comprised of some of Nashville’s best studio musicians, the house band included Brent Mason on electric guitar, Glenn Worf on bass, Paul Franklin on steel guitar, Eddie Bayers on drums, and Steve Gibson on acoustic guitar. Shure hardwired mics figured prominently in the performances in the form of KSM32s on overheads, Beta 98s on toms, and SM57s on snare and guitar amps. Newcomer Jamey Johnson sang on a hardwired SM58, the same choice of John Rich.

– Many featured performers on the three-hour show also made use of Sennheiser’s G2 wireless monitor technology. McEntire opened the show on a wireless Sennheiser SKM 565 G2 vocal mic paired with an EM 550 G2 receiver, taking to the stage later in the telecast to perform her new single, “Strange.”

– The show opened with Brooks and Dunn, Taylor Swift, Rascal Flatts, and other A-list artists using Shure UR/SM58 wireless to sing a medley of hits.

– Sugarland joined the show-opening medley to perform part of “It Happens” using Sennheiser SKM 5200 RF handhelds fitted with MD 5235 capsules in combination with EM 3532 receivers, and made a second appearance later in the evening for a rendition of “What I’d Give.” The pair picked up the award for Top Vocal Duo, and McEntire also presented lead vocalist Jennifer Nettles with a Crystal Milestone Award. The honor was in recognition of Nettles being the first woman to be credited as the sole songwriter on the ACM’s song of the year, since Donna Fargo in 1972, for 2007’s “Stay.”

– Shure endorser Heidi Newfield and her Shure UR/SM58 mic took the stage shortly thereafter, as did Toby Keith singing into a Shure UR/KSM9 wireless handheld mic. Falling back into the gravitational pull of the Shure UR/SM58 like iron shavings orbiting a powerful magnet, George Strait, Lee Ann Womack, Keith Urban, and Shure endorser Montgomery Gentry each took their turn in the spotlight, as did Carrie Underwood, who sported additional dazzle by bringing her custom-studded UR/SM58. 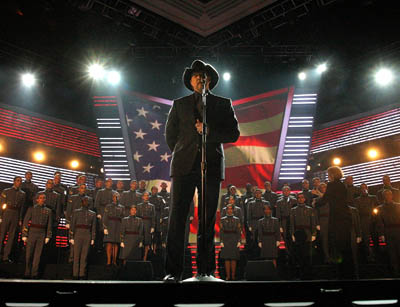 – Miley Cyrus made her ACM Awards show debut with “The Climb,” sporting a handheld Sennheiser SKM 5200 with MD 5235 capsule with a unique custom white, metallic and chrome finish.

– The show’s UR/SM58 highlight, however, came when Trace Atkins relied on the mic to sing “Till the Last Shot’s Fired” accompanied by the West Point Glee Club in support of Wounded Warrior Project, who were also captured by UR/SM58s. Rascal Flatts closed the evening with “Here Comes Goodbye,” done with UR/SM58s.

– The Sennheiser SKM 5200/MD 5235 combination was also put to use by Blake Shelton for his performance of his hit single, “She Wouldn’t Be Gone,” from a stage in the audience. Magician David Copperfield used the wireless mic and capsule pairing as he produced Taylor Swift from an apparently empty box for her performance on the show. 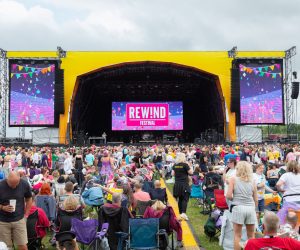