The SpectraPulse wireless microphone system from Audio-Technica is one of the more interesting products to enter the market.

It was announced about two years ago and appears aimed mostly at installed sound applications, specifically boardrooms and courtrooms where operating range is not so much the issue, but data security and ease of use are important.

The system represents a fresh approach in its form factor, technology and performance, when compared to “traditional” wireless microphone systems.

It is my understanding that when the DTV transition became imminent, Audio-Technica decided to investigate alternatives to standard systems based on UHF frequencies.

Only Sabine, X2, RevoLabs, and some of Lectrosonics’ more specialized products have gone out of the standard TV band in recent years, with products in the ISM (902-928MHz), 1.9 GHz and 2.4 GHz ranges.

System Basics
The SpectraPulse system is made up of the following main components:  drm141 antenna/digital receiver module, aci707 audio control interface, mtu101 boundary microphone/transmitter, and the mtu201 desk stand/transmitter that can be used with gooseneck microphones.

There is also a charging station for up to seven transmitters and an optional software package to add data encryption to the system.

The drm141 antenna/receiver unit is usually mounted on the wall in the conference room, and then connected to the aci707 control interface via a standard shielded CAT5 cable. 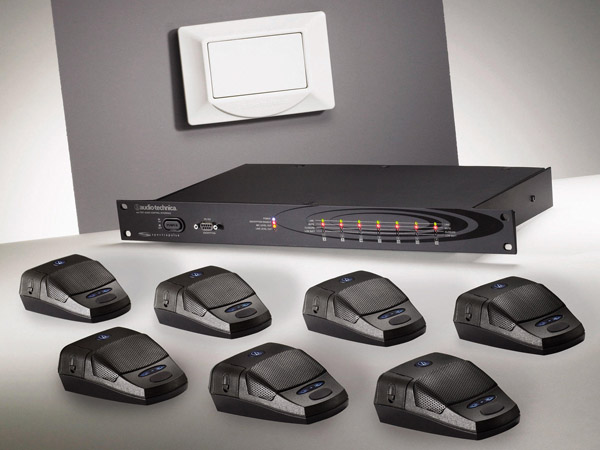 Technology
In contrast to all these other offerings, SpectraPulse operates with a center frequency of 6.35 GHz and a bandwidth of 500 MHz, and thus has an UWB (Ultra Wide Band) designation. UWB is a “carrier free” wireless method, while even spread spectrum still relies upon a carrier, which, if disrupted, means that signal will be lost.

There are some advantages to operating at such a high frequency – most importantly; there are no TV or other wireless microphone transmissions in the range.

In addition, the SpectraPulse design involves the use of very rapidly pulsed signals, each one a short burst over a very wide instantaneous bandwidth of frequencies. While the technology concept is by no means new (it dates back to Marconi in the late 1800s), A-T is the first to implement it with a commercially viable product. 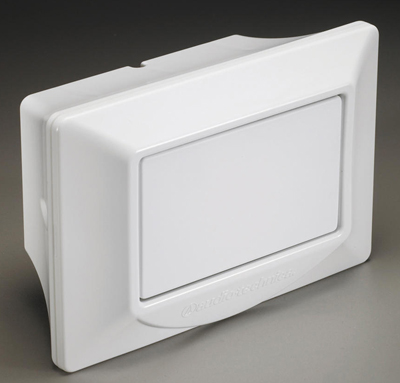 In the course of writing this article, I also received some additional input from Jackie Green, Vice President of R&D/Engineering at Audio-Technica, who notes that the 6 GHz band was targeted because it’s one of the most “open” ranges of spectrum.

Jackie also notes, “We have eliminated most possible conflicting frequency applications by being centered at 6.350 GHz, and in addition, even if we operate a SpectraPulse system physically next to the broadcast satellite up and down links (not random, but specific fixed frequencies between 4 GHz and 6.425 GHz), we do not experience interference or degradation of our signals.

“This is because SpectraPulse is not a carrier-based technology. There is no signal to ‘mix’ or ‘fade’ or ‘drop.’ If a competing wireless system comes in on exactly our frequency of operation at exactly our point in time (very unlikely) it’s not that our system won’t work – the problem is that the DRM (Digital Receiver Module) simply cannot decide which signal is the one it wants in the TDMA (Time Division Multiple Access) time slot ,and starts bouncing back and forth between signals in time or experiencing collisions. This sounds like talking through a ‘fan,’ but it doesn’t sound like a hit, drop, pop, fade, or disappear entirely, as users experience with traditional FM signals.”