Where It Should Be: Getting The B3/Leslie Combo Into The Mix

Battling the beast to capture and amplify the signature sound

Developing Options
Most seasoned techs capture the sound of a Leslie with two mics on the top panned hard left and right, and a kick drum mic on the 15-inch cone panned center.

The problem is that when it’s cranked up to rock levels, you hear the spinning rotor horn “whoosh” by the top mics, while the bottom rotor mic captures an irritating rumble as the wood cabinet shakes the stage.

Then if you get it up loud enough to be heard over the band, the whole rig takes off into low rumbling feedback. So most engineers just get it as loud as they can without getting into trouble and leave it at that.

John Lord from Deep Purple took matters into his own hands when he dumped the Leslie in trade for the Marshall stack, and he got it heard. But that sound is only good for early metal – think Smoke on the Water.

I’ve seen B3 players use two Leslie cabinets, and have even seen players put a Leslie on each side of the stage next to the PA stacks! Keith Emerson from Emerson, Lake and Palmer had extra rotors so he could stack them on top of stock Leslies to double the top end. 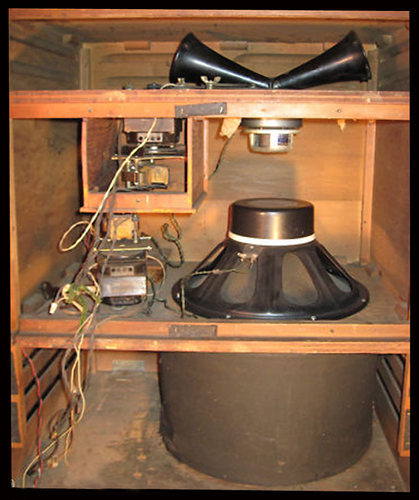 Send In The Clones
In the last decade several companies, including the re-worked Hammond Company outside of Chicago (where the B3 originated) and the Swedish company Nord, have come up with portable keyboards that have all the audio attributes of a real B3 without the weight and giant wood case. To get past having to carry the big wood-box Leslie, they’ve developed software that emulates the sound, built into the programming.

In a quest for the “real sound,” German company Neo has developed an outboard pedal called the Ventilator, which I’ve been impressed with enough that we’re distributing it in the U.S. It’s an exact replica of a 122 Leslie programmed into a computer chip, and even has an overdrive control to emulate the tubes distorting in the Leslie amp, as well as stereo mic simulation with a knob that “adjusts” how close the “mics” are to the “rotors.” Put into two direct boxes panned left and right on your console and you can crank it up as loud as you (and, well, I) like.

I encourage you to go here, where Danny Abelson provides a hands-on report on the Ventilator, which a growing number of sound and stage techs are carrying. As you’ll read in Danny’s report, Chuck Leavell of the Rolling Stones uses one, and there are also units with jazz burner Joey DeFrancesco, mainstream rocker Bob Seger, blues rocker Steve Miller, Victor Wainwright with Southern Hospitality, and even John Mayer (on his guitar).

The newest hot setup is a real vintage Hammond B3 on stage (looks cool and feels like you’re driving a Peterbuilt truck) into a Ventilator to the PA and monitor desk in stereo over two DI boxes. Sounds like a miked Leslie in the studio on a set of headphones.

It’s a way to be the hero when the organ player gives you the look that says, “Hey, crank it UP!” – you can give it the gas and get it up where it should be.

Gary Gand has been designing and mixing sound for 40 years and is president of Gand Concert Sound, Elk Grove Village IL., just west of Chicago.

Gary has been designing and mixing sound for 40 years and is president of Gand Concert Sound, Elk Grove Village IL., just west of Chicago.
All Posts
PrevPreviousQSC Systems Appoints Bart Wood Director Of Sales For Central Region, US
NextChurch Sound: The Nature Of Soundcheck And Building A MixNext
Top Stories
Explore All Study Hall