Westminster’s historic Emmanuel Centre was designed by architect Sir Herbert Baker and completed in 1928. The one thousand capacity building has a circular main auditorium with a domed glass roof supported by twenty-four pairs of marble columns between high arched windows, with tiered seating of original polished English oak.

Although an architectural gem, the venue presented an interesting sound reinforcement challenge which was met with V-Series loudspeakers from d&b audiotechnik.

The reverberation time in the main auditorium measured around 3 seconds, which was a significant obstacle to speech intelligibility, and the Grade 2 listed status of the building meant that drilling into the structure of the venue was forbidden, ruling out the installation of flying points.

Like many venues of its type, the Emmanuel Centre is an increasingly multi-purpose space. Where once the sound reinforcement needs were for speech only, today the schedule at the venue features a wide variety of live music performances and concerts, from rock and roll to jazz. To bring the sound at the Centre up to date, Elvis Uriona, Emmanuel Centre head of sound, approached long-term sound system partner, Autograph Sales & Installations. 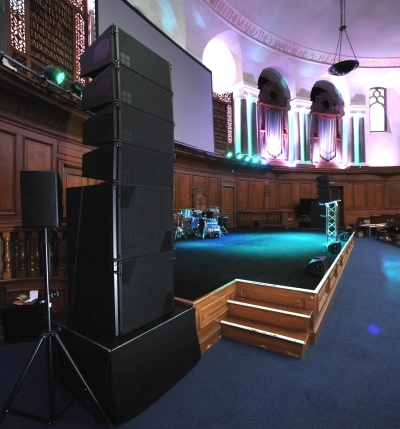 Peppe Mallozzi, who led the system design for Autograph, was familiar with the acoustical challenges and structural limitations of the venue and was well aware that a ground-supported flown solution would look “horrendous.” Fortunately, the Emmanuel Centre sound team already had a positive experience of the only acceptable alternative – a ground-stack solution, as one of their biggest clients, Hillsong Church, whose services feature full rock and roll shows, had for some time been bringing in its own PA – a d&b V-Series system.

Keen to cater for visitors, Emmanuel Centre wanted a permanent system which would serve a big rock and roll show, and which Hillsong would be happy to use – while still providing clear speech reproduction for every seat in the auditorium.

d&b lent support in the form of Oran Burns, d&b Education and Application Support, to work closely with Mallozzi and the Emmanuel Centre technical staff.

Burns says, “Obviously if you’re ground-stacking a system left and right of the stage, you have the problem of it being very loud for the people closest to the speakers and potentially not loud enough for the people at the very back.”

What’s more, in such a reverberant environment, accurate pattern control is crucial. To meet the challenge of coverage without over-exciting the acoustics of the room, the design proposed by Mallozzi harnessed the highly controlled directivity of the V-Series cabinets and the passive cardioid design of the V-SUBs.
“They had the demo system for about a week,” says Mallozzi. “They were able to use it for some corporate shows, a couple of Sunday services, and they were convinced. They said, ‘this is just incredible.’”

With the effectiveness of the system confirmed, installation took place in January 2018, project managed by Adam Broom, Autograph Technical Sales engineer. The final design features Vi-Series cabinets, the installation-specific variant of the V-Series. Seated on 600mm risers, two Vi-SUBs per side are topped by two Vi12 cabinets, their 120˚ horizontal dispersion targeting the front half of the room, while above these two Vi8s per side, with 80˚ horizontal dispersion, neatly target the further reaches. Four d&b E8s on the stage lip serve as front fills, while a further two E8s per side are mounted on the ground-stack as out fills, completing an even 180˚ coverage. 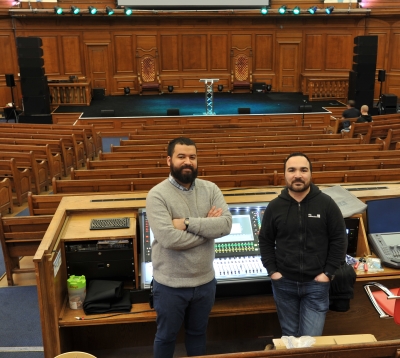 The system is powered by three d&b 30D amplifiers, and user-friendly access to system presets is enabled via the d&b R1 remote control software. Ensuring the venue has control tools enough to satisfy the needs of any visiting sound engineer, Autograph also provided a DiGiCo SD12 compact digital mixing console and, as part of its service, is delivering training for the Emmanuel Centre staff in both d&b and DiGiCo systems.

Burns summarises, “Getting intelligibility all the way to the back, in such a reverberant room, from a single position at the front, was quite a challenge. We needed V-Series not necessarily for its level requirements, but for its directivity control. It controls down to below 300Hz in the horizontal, and that was necessary to get the intelligibility to the back of the room. Relative to the pattern control that it offers, the V-Series is actually quite a small cabinet.”

He adds, “The passive cardioid design of the V-SUBs is also very useful, giving a significant rejection to the rear. It’s low-frequency pattern control that helps to create a clear sub-impulse in the room. The cardioid subs play a big part in achieving that performance.”

Summing up the response from the client, Mallozzi says, “Jonathan, the main in-house sound engineer, called me and said ‘it’s incredible, it’s getting better and better.’ Now the Emmanuel Centre can really predict what a show will sound like and they have a huge amount of stage rejection, so can really push the live microphones, which couldn’t be done before. The Centre has its DiGiCo SD12 and d&b R1 remote control, so they can play all sorts of clever tricks with it. They’re very, very happy.”