A rooftop concert to commemorate The Beatles' final concert on the rooftop of their London recording studio 45 years ago...

Forty-five years after The Beatles’ final concert on the rooftop of their London recording studio, Webster University in St. Louis, MO celebrated that event with a rooftop concert of its own. Students in the department of Audio Aesthetics and Technology produced the impromptu event with the St. Louis Beatles tribute band, The Abbey Road Warriors.

The band performed from the 4th-floor outdoor patio of the school’s Emerson Library to a crowd of students, staff and visitors who gathered for the show in the Webster University quad. The songs were the same as The Beatles played on Thursday, January 30, 1969. This celebratory concert was on the same day and time, 45 years later.

“The audio and video production students from Webster University’s School of Communications did what they do every day – practice becoming media professionals,” explains Barry Hufker, department chair of Audio Aesthetics and Technology at Webster University. “The students assembled the sound reinforcement system, mixed the live audio and recorded it. Webster’s Video Production students shot the concert to commemorate the event. It was their hard work and the great musicianship of the Abbey Road Warriors which made the event a success.”

While the event was impromptu for the audience, Hufker and others in the Webster University School of Communications have been planning this project since November. 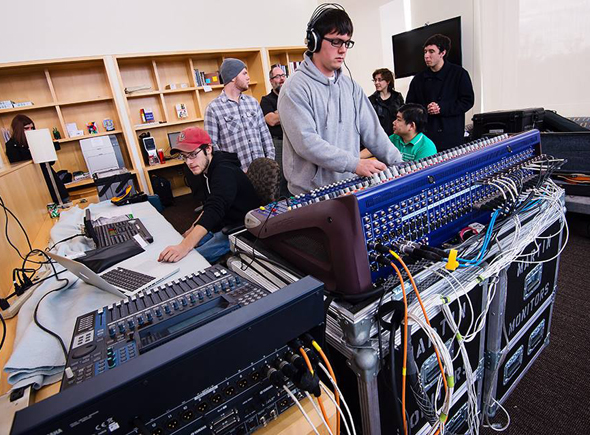 “The Abbey Road Warriors jumped on this right away when I explained the idea to them and we were so lucky to have them,”Hufker said.“They are music educators as well as professional musicians and Beatles fans.  It was a great marriage between these educators and our students. The event was largely a surprise to the Webster community so we had a lot for the students to learn about producing a live music event like this.”

The original concert in the heart of the London business district drew a number of challenges for the Beatles and the audio and film professionals. Crowds gathered to hear the band, traffic began to jam and eventually the police showed up to demand they stop playing. While the police did not show up on Webster University’s campus, the event was not without challenges.

“The weather in St. Louis was certainly on par with the weather in London in ‘69,” said Hufker. “For our concert it was chilly and windy which presented challenges for the band playing instruments and the students as they worked on sound outdoors, but they were troopers.  The conditions were harsh but everyone had great spirit.. The students demonstrated their education and carried off an event people will talk about for years to come.” 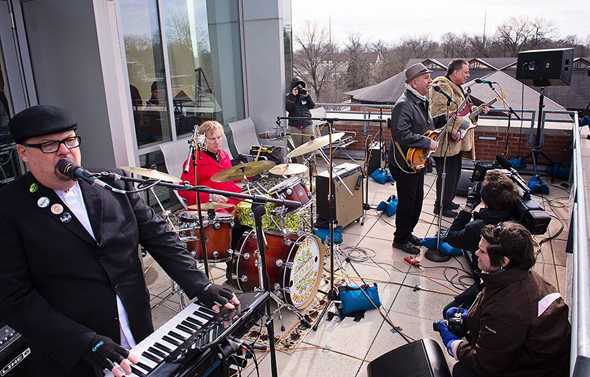 Hufker says that by pairing events like this with classroom instruction, students are getting more experience on the type of work that they’ll be doing once they graduate.

“It’s important to me to draw attention to the hard work of unseen professionals at media events,” says Hufker. “While the performers get the most attention, there is a group of people the audience never notices–the artists mixing live sound, capturing the video and operating the lights–these are the professionals who make the event happen. And quite often they come from Webster University.”

Read More
A Question Of Aesthetics Versus Engineering

Read more about some of the interesting things going on at Webster University here.

Jennifer Starkey is an writer and public relations professional based in St. Louis. You can follow her on Twitter at @JennyStarkey.