Waves Audio has introduced the eMotion LV1 complete live mixing system. It is an all-inclusive and cost-effective mixing solution, ideal for houses of worship, clubs, touring bands and live engineers. 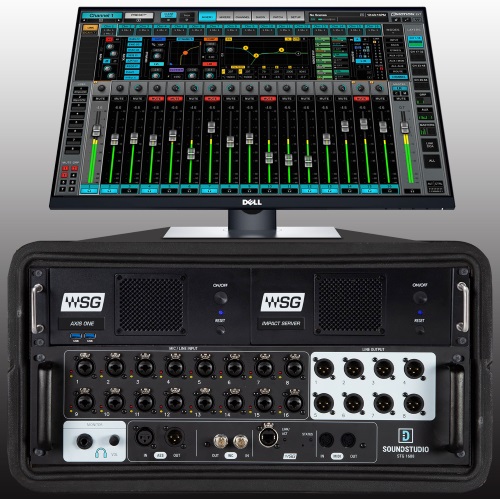 All audio coming from the stage and through the plugins is processed on the included SoundGrid Impact Server-C. You can send the processed audio out to the PA system and back to the stage via the eight-line outputs. All of this takes place at a speed of only 0.8 ms at 44.1–96 kHz.

To enhance your LV1 mixing system, run eMotion LV1 on Axis One, a Waves-optimized computer made from the ground up to perform consistently and reliably even in the most challenging scenarios. It features an Intel i5 8500 processor, 16 GB of DDR4 RAM, two HDMI ports, one display port, eight USB2/3 ports and a USB-C port, all cased in a rugged 2U half-rack chassis.

Grammy-winning rapper Pitbull’s front of house engineer, Will Madera comments, “Using the LV1 to mix Pitbull on stage has been a watershed experience. LV1 has made my mixing as easy as mixing in the studio. Its sound quality is clear and crisp, and having all my plugins in the console’s channel strip is amazing. Eight plugins per channel – what a beautiful thing. The future of audio is here.”

Front of house engineer Tomas Wolfe keeps a smooth live mix for Run The Jewels’ sold-out shows, even with mic cupping, heavy bass and other challenges faced at live hip hop shows. Wolfe comments, “Really, without these plugins I wouldn’t have been able to do as good of a job in my live shows, period. And having them all run inside the LV1 mixer, all as part of one lightweight system, is the bonus in this situation.”

Front of house engineer Jon Schumann (Mew, Lykke Li) has been mixing Danish electropop singer/producer MØ using the LV1. Schuman comments, “ Two things – the sound quality is amazing, and the system is so flexible and light. We’re doing quite a few festivals and it’s great to be able to pack up our entire small creative ‘office,’ check into the airport, and put it all on the plane to fly with us wherever we go on tour. Even if you’re a smaller band, you can take it with you. You don’t have to be Coldplay to travel with your own rig.”

Phil Peters, director of Audio Services and front of house mixing engineer for Christian Broadcast Network, remarks, “At CBN, our content dictates several requirements: excellent sonic quality, small footprint, ease of use, digital integration, and ideally the ability to run Waves plugins. After demoing the eMotion LV1 software with a Surface Pro and a single DiGiGrid MGB, we all agreed that the mix engine sounded great and the software interface would be beneficial to our workflow. We could also purchase the building blocks of the system and grow as our use of the LV1 developed. After one of our first ‘live’ productions, we found ourselves with internal discussions over who would get to use the LV1 on the next show, which led to the purchase of the second one.”

With the Waves eMotion LV1 complete live mixing system, you can now create studio-quality sound, live on stage with an all inclusive setup and at an affordable price performance as well.