When the action film, Baby Driver hit the big screen, audiences were treated to sound effects courtesy of sound designer/composer Watson Wu and his trusted equipment from DPA Microphones.

For Baby Driver, Wu used two DPA d:screet 4061 omnidirectional lavalier microphones to record the cars’ engine compartments and onboard sounds. Watson also used one d:dicate 4017B shotgun microphone for the external sounds of the cars.

“On Baby Driver, I used the d:screet 4061 to capture full frequency and bold sounds,” says Wu. “The d:screet 4061 captures a lot of bottom end, which gives that aggressive sound that I want. They can be extended to hundreds of feet long with the extension MicroDot cables. It is a fantastic microphone.”

For the onboard sounds, Watson sat in the front passenger seat next to a professional driver with the microphones routed to his Sound Devices 788T-SSD recorder on his lap. The d:screet 4061’s were mounted inside a Rycote Mini Windjammer and with the help of gaffers tape, they were strapped to the firewall allowing for the hood to be closed. Wu recorded up to eight sounds simultaneously, including the vehicle’s stereo system, outside next to the exhaust pipes and passenger areas.

“The tiny d:screet 4061’s gave me a lot of bass response and high frequency that I needed,” adds Wu. “They kept performing despite the hot Atlanta summer weather and the hot engine compartment. My DPA mics were very consistent with the overall sounds throughout the multiple days of the recording sessions. We literally killed three cars with how hard we ran them but despite the heat and abuse, the DPA’s kept working with no problems.” 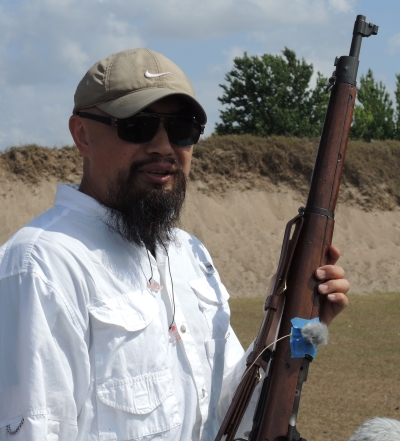 Wu was also thrilled with the sound he was able to capture with a DPA d:dicate 4017B mic. “The d:dicate 4017B Shotgun mic is a very versatile microphone that is capable of capturing a wide range of levels, from the quietest whispers to the loudest of sounds while still maintaining a pleasantness to the ear,” says Wu. “A lot of other manufacturers’ microphones have a nasty distortion that make you pull your head back, but the d:dicate 4017B delivers nice, bold and ear-pleasing sounds.”

In addition to Baby Driver, Wu recently used his DPA mics on a commercial for Mercedes-Benz Canada titled, Hearing is Believing. The commercial, released in movie theaters and mixed in 9.1 Dolby Atmos, provided a 4D experience with sound being in the foreground.

“I was hired to put mics inside and outside of a very high-end Mercedes-Benz AMG E63S,” adds Wu. “At over 600 horsepower, we recorded the car doing doughnuts, drifting, gripping and figure 8’s. We used the d:screet 4061 in the engine, d:screet 4062 miniature omnidirectional microphone by the wheels to capture skidding and burnouts, and the d:dicate 4017B to capture pass by sounds. The DPA mics really shined for the aggressive sound they wanted the audience to experience.”

Wu is also currently working on a video game using DPA’s new d:screet CORE 4061 lavalier microphone to capture onboard engine sounds. “I used the d:screet CORE 4061 and the d:dicate 4017B to capture tire sounds,” says Wu. “I rented an electric car and we mounted the mics outside. We drove over gravel, a bridge, grass and wet pavement. In the video game, you are hearing the sounds of the surface that you are driving over along with the engine and the exhaust. The DPA mics worked incredibly well. The d:dicate 4017B is such a light mic, it allowed me to suction cup and mount it onto the car. You can’t do that with other mics. It’s light enough and captures very focused and sweet sounds.”

In addition to the sound provided by DPA mics, Wu is also very happy with the customer service he receives.

According to Wu, “I love the support system from DPA. I know that the company will respond to whatever question or issue I have in a fast and professional manner. I can send the mics off to Colorado for a simple modification and receive them back very quickly. Being a mic junkie, I am always curious about what mics can do and for over a decade I have been very impressed with DPA.

“I’m a very rare, extreme effects guy. I need DPA for every vehicle-recording job I do. DPA mics are consistent in sound. I can even extend my DPA mics for very long lengths, as was the case with recording an 18-wheel semi for a video game and know that I am going to get the best recordings possible. Since I was a kid, I have loved sound. Sound is music to my ears and I get so excited when I use my DPA microphones.”