Held over the weekend of June 23rd and 24th, 2018, the San Francisco Pride Celebration and Rally featured 20 live-music and performance stages celebrating the energy and diversity of the LGBTQ community. Sound Image San Francisco handled production for 11 of the 20 total event stages and deployed their entire VUE Audiotechnik arsenal for 7 of them, including the main stage located at the steps of the city’s iconic City Hall.

According to George Edwards, Sound Image San Francisco’s general manager, VUE made the particularly challenging event more manageable thanks to the brand’s Continuous Source Topology (CST) technology, that allows the seamless combination of al-class line array elements to build complex hybrid arrays to meet the unique needs of each performance venue. “The beauty of VUE is that we could quickly — and flawlessly — mix and match elements and deliver spectacular performance on each stage,” explains Edwards. 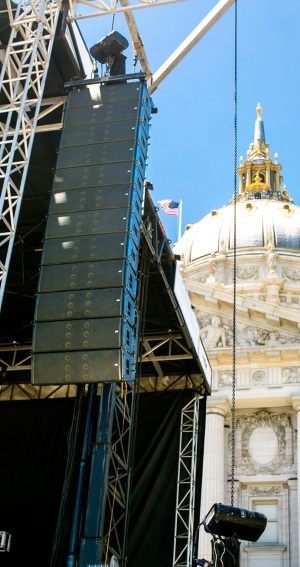 While the main stage was functional for the entire weekend, a handful of the remaining stages — showcasing everything from Pacific Islander Culture to Trance – were set up overnight on Saturday for use on Sunday only. According to Edwards, the setup logistics were particularly challenging.

“Driving in San Francisco is challenging on a good day, but when you’re driving trucks in and out and navigating 1 million spectators in a 36-square-mile city, that makes for a pretty wild ride. All the more reason we love the VUE al-Class since setup is a breeze and they require little to any tuning once flown. We absolutely love this PA,” says Edwards.

Following are the configurations for each of the remaining six VUE-powered stages: