When Los Angeles-based Neptune Productions designed the system for the Homenetman Centennial Street Festival this past September, they expected an audience of between 700-800 people for the afternoon of Armenian pop performances.

Neptune specified the VUE Audiotechnik al-4 line array system to provide coverage for the outdoor stage at Glendale, California’s Central Park. Yet, as the audience size grew four-fold to almost 3,000, the al-4 system rose to the challenge and provided plenty of coverage and clarity.

According to Neptune Productions president, Raffi Ganoumian, the al-4s performed beyond everyone’s already high expectations for the system. “We knew the al-4s could more than handle the original audience projections of upwards of 800 people, but we had no idea how much further we could push them. With Harut Pambukchyan on stage, we noticed the crowd start to grow rather quickly, so we started cranking the system up and gave it more and more juice and it performed like a champ.” 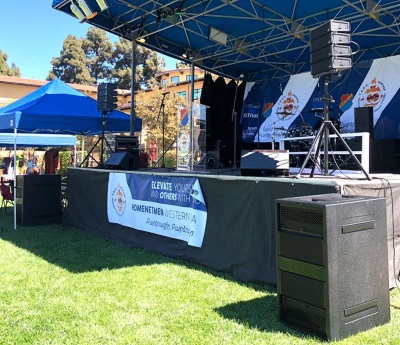 Situated in a grassy field in the park, the all-day Street Festival featured a variety of traditional and pop Armenian live music performances.

As Ganoumian explains, as the crowd swelled to more than 3,000, the al-4s provided more-than-ample coverage for an audience field of more than 200-feet deep.

“Perhaps the most amazing part is that the al-4s performed the way they did without the benefit of rigging,” he explains. “In spite of not being flown 15 feet in the air, and given their compact footprint, the al-4s performed so well that we completely impressed the performers that were on the stage, the organizers, and even ourselves. Now that’s something to celebrate.”

All Posts
PrevPreviousAn Introduction To Audio Networking
NextCast Of Characters: Ever Worked With Any Of These Folks?Next
Live Sound Top Stories
Explore All Live Sound