Celebrating its 82nd year in 2018, the Atlanta Dogwood Festival marks the beginning of summer for locals and visitors alike. Held in Atlanta’s Piedmont Park, Dogwood attractions include a Fine Artist Market with sculptures, paintings, pottery, jewelry, and photography, as well as a Kids Village, a 24-foot climbing wall and numerous live musical performances from both national and local talent.

This year, headliner Shawn Mullins, along with more than 20 regional acts shared the main stage with VUE Audiotechnik al-8 line arrays, supplied for the first time by Atlanta-based True Productions.

“We’d been hearing a lot of positive things around the VUE line arrays, and saw it going out with some pretty big acts, so we were really anxious to give one a try,” comments Bill Abner, event manager for live outdoor events at True Productions. “The crowds at Dogwood vary throughout the day from a few hundred in the early hours to many thousands as the day progresses. Plus, the venue is in a public park, so it’s a really good trial for a new system in terms of both output, coverage, and ease of deployment.” 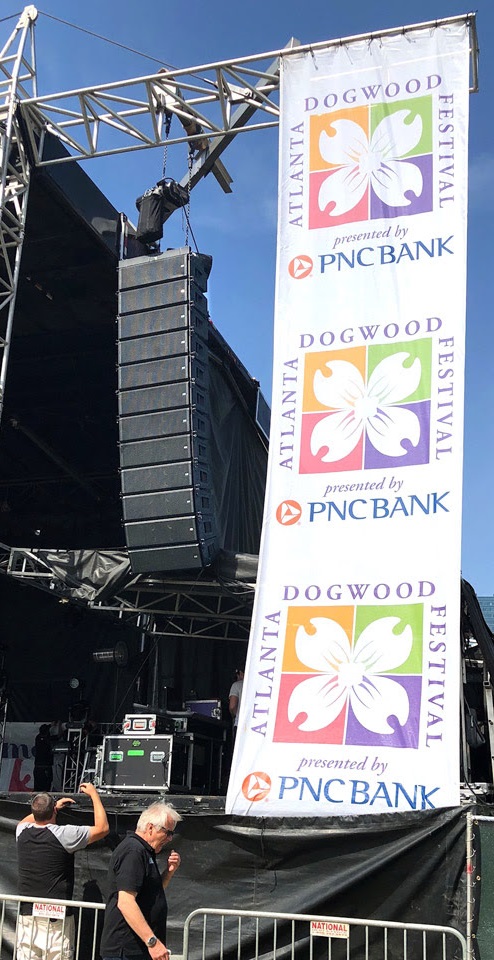 A quick call was made to VUE headquarters, and a VUE system was on the way to True Productions for a thorough shakedown at Dogwood.

“We don’t have a lot of time for load-in at Dogwood, so the first real test would come at setup,” explains Abner. “We needed to get the rig flown and tuned very quickly with minimal tweaking.”

For the final design, Abner specified left and right al-8 arrays comprised of 12 elements each. A total of 12 hs-221 dual 21-inch ACM subwoofers were arced across the front of the stage for low-frequency support. VUE al-4 subcompact line array elements were placed atop the subs for additional front fill and with consistent al-Class voicing.

Abner continues, “The al-8 passed our first test with flying colors. It was one of the fastest setups I’ve done in recent memory. Having never used a VUE rig before, we set splay angles based on our best-educated guesses. Coverage was exactly as predicted and pretty much spot on right out of the box. We were all really impressed.”

Piedmont Park’s main stage is located in the corner of the park with a wide hill encircling the whole area. Park capacity can exceed 150,000 during the height of the festival, with many thousands in the main listening area alone. Filling the park with sound during peak capacity, and then backing down for lighter crowds while maintaining fidelity at all volume was essential.

“From the moment we fired it up, the VUE system sounded amazing,” says Abner. “We had several notable sound guys come through during the event. They were all impressed with the system responsiveness, fullness of the sound, and how hard you can push it. The beryllium top end sounds absolutely pristine at virtually any volume, and you could literally feel the subs in your chest well past the 150-foot mark. Those subs are the perfect companion for the al-8 array. Overall we couldn’t be happier with the results.” 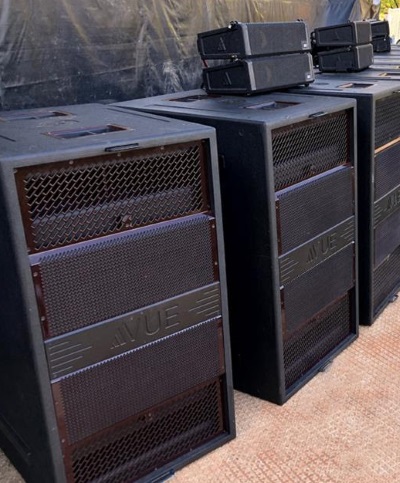 With another Dogwood Festival successfully concluded, Abner and the True Productions team are more than satisfied with their first VUE experience. Having checked all their critical boxes, the group is anxious to make VUE al-Class a permanent member of their audio arsenal.

“I was amazed at how easy the VUE team was to deal with. They genuinely excited to help us explore the system,” remarks Abner. “They even arranged for us to speak to several of their more prominent users – such Kyle Hamilton who currently has a VUE al-12 out with Janet Jackson, and Rob Thomas, who mixes Third Eye Blind on an al-Class rig. We were made to feel like part of the family and that is a level of first-class you just don’t see much anymore. We’re looking forward to many more collaborations with VUE.”