Most electronic equipment is designed to operate at voltage levels of 120 volts in North America or 230 volts in Europe.

Occasionally some very current hungry equipment might be powered from 208 volts in North America.

Regardless of the power line voltage, power supplies inside the electronic equipment convert this AC voltage into much smaller DC voltages that power the integrated circuits and transistors which in turn do the work inside the preamp, mixing console, graphic equalizer or amplifier.

Voltage surges are a commonly recognized but somewhat misunderstood power quality phenomenon. They are typically hundreds or even thousands of volts in amplitude, and may contain substantial amounts of energy.

Back in the days when electronics was largely based on vacuum tubes, a voltage surge of a thousand volts might not have’ been a big deal. It’s much more of a problem, however, for systems that use solid state components whose operating voltages are five volts or less.

The damage caused by a voltage surge may be either visible or invisible. If surge energy is large, destruction of an electronic device may occur, and damage will be tangible in the form of charred components.

The component gradually degrades, and damage accumulates with repeated exposure to smaller energy surges. Eventually the component fails and usually without visible damage. It’s difficult to associate cause with effect in such cases, and equipment failure may often not be attributed to voltage surges at all.

Voltage surges come in different shapes and sizes depending on where they occur in a facility. The Institute of Electrical and Electronic Engineers (IEEE), in its standard IEEE C62.41, classifies voltage surges as Category A, Category B, or Category C according to where they occur within a building’s electrical system. The figure at right illustrates the three general categories. 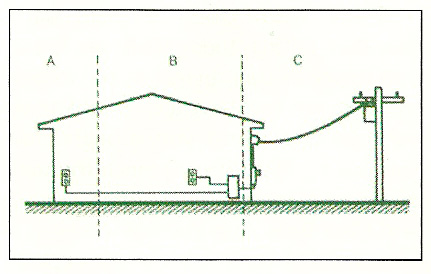 Category A to Category C, the maximum voltage amplitude of the surge along with the maximum surge current and surge energy become greater.