Seven keys to the sometimes daunting task of making those varied voices sound like you want them to sound...

In 1878, a room full of people watched Thomas Edison’s new phonograph spin and heard a voice read “Mary Had A Little Lamb.”

Despite the excitement of hearing the first audio recording, I’ll bet someone thought, “That sounds like crap.” Having heard the recording, I agree.

Mixing the spoken word is a task in itself, but to mix singers and blend them with a band is an even more daunting task. Singers produce a range of sounds, good and bad, and no two voices are alike. This means each vocal must be uniquely mixed. What works for one person’s vocal isn’t right for another.

The good news is that I’ve identified seven areas of vocal mixing to focus on that take a lot of the hassle out of the process.

There’s no reason for low-end frequencies to be in a vocal channel. Unless it’s an acapella group, musical instruments such as the drum kit, bass, and to a lesser extent electric guitar should be the only things that populate the sub-200 Hz frequencies.

A vocal microphone can pick up these sounds, either directly or through stage monitors, as well as any extraneous low end from the singer. Remove these by using a high-pass filter.

The filter can be fixed-point, such as rolling off frequencies below a set point, usually in the 80 to 120 Hz range, or it can be a variable filter. My personal preference is to roll off at as high a point as possible. For example, I regularly work with a singer that needs the filter set at 180 Hz. My process is to roll it higher and higher until hearing a negative impact on the voice, and then pull it back a few hertz.

Male vocals can have excessive low end, so console functionality permitting, also take a 3 to 6 dB cut in the 250 to 350 Hz range. This eliminates the muddiness in most male vocals.

There’s no such thing as perfect singing voice. Even the best singers have slight imperfections in the sounds they produce. (Just don’t tell them I said that.) These imperfections are usually in the 2.5 to 4 kHz range.

Find the sweet spot to remove the harshest frequencies. With an analog console, use it’s sweeping-mid or a graphical EQ frequency selector. Start at the 4 kHz point and apply a 6 dB cut. Then slowly sweep that frequency down until the vocals clear up. Next, decrease or increase the cut as required.

Analog consoles have a fixed bandwidth and therefore the cut will affect frequencies centered on the primary selected frequency, though in lesser amounts, like an upside-down mountain. However, this bandwidth (Q) can be altered on digital consoles. The tighter the bandwidth for cutting the better, because harsh frequencies are best removed with surgical precision – though without the worry of a malpractice lawsuit.

Turn On The Lights

Add brightness to the vocal with boosts to select high-end frequencies. The boost creates a bright and sometimes airy sound. The amount to add depends on the style of music, the song arrangement, the vocal, and what sounds good in the room.

Apply a gentle boost of 3 to 4 dB above the 6 kHz point. Sweep this point up until it produces the desired results. This is easy with consoles that have more than one sweeping-mid. In the case of consoles without, use the peaking high-end EQ control to increase that boost for all the high-end frequencies.

Despite the previous steps, a vocal mix can still be wanting. The bad stuff’s gone, and it’s got some sparkle, but it’s not quite there. Enter Mr. Smooth.

There’s a danger zone in the mid-range. One wrong move and the vocals can sound flat and dull or harsh and annoying. Welcome to the 1 to 2 kHz range.

Sweep a tight cut in this range This can be more of a problem area than the 2.5 to 4 kHz range, so when limited to the number of frequency manipulations, opt for which has the greatest impact.

Bring Out The Bass

Some lower-mids might be needed to add substance to the voice. Boost in the 200 to 600 Hz range. As noted earlier, vocal characteristics vary widely, so while some singers might have plenty of energy in this range, others might be in desperate need of it. Don’t make them sound like someone they’re not; rather, the goal is to make them sound like a better version of themselves.

Earlier, I mentioned cutting in the 300 Hz range for male vocals. But doesn’t this contrast with the aforementioned tip on boosting? Yes. No. Maybe.

Mixing is a process of additive and subtractive measures. The difficulty is in deciding what to do first. I’ve found the most success in removing as much of the bad as possible, and then listening to what remains and boosting where appropriate.

A vocal that’s devoid of much in the 300 Hz range is a vocal that’s not going to have the natural muddiness and therefore might be a prime candidate for such a boost. This doesn’t mean muddiness is added. It just depends on the specific voice characteristics as well as the style of music. 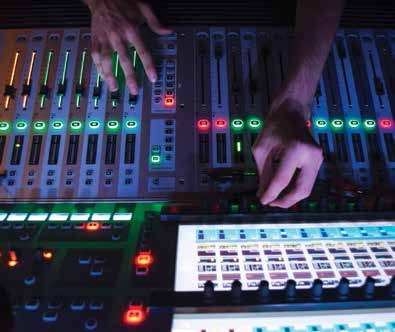 Time to work on the other channels. Much of the natural voice is in the mid-range frequencies, and so are the fundamental frequencies of most other instruments. Part of mixing a good vocal is making room for it in the mix. The vocal needs to own the primary area where it shines through. This doesn’t come by boosting only the good – it also comes by carving out space from other channels.

Look to vocal and instrument channels that clash with the vocal. Determine which “owns” that primary frequency area, and then adjust the others by applying a slight cut in that area. I’ve gone back and found I had two channels where both had the same frequency boost applied – of course they clashed.

Audio production is part science and part art where too often the scientific mind is allowed to dominate. This happens a lot with EQ work. During any of the above processes, you might ask the question, “Does this sound good?” The question (and it’s answers) come from trial and error. Boost here, evaluate. Boost there, evaluate.

There’s another way. During the vocal mixing process, imagine how the vocalist should sound. Ask these questions: What frequency areas dominate?  What areas are minimal?  How does it fit into the overall mix?

Then go to those key mix areas, such as using the high-pass filter or adding brightness, and apply those measures so they meet the sound in your head. A great vocal mix can be imagined and then worked towards. It’s much harder and less likely to be obtained through trial and error.

Read More
In The Studio: Condenser Or Dynamic For Vocals? The Cases For Both

This process isn’t easy for those new to the EQ process and frequency band characteristics. But learning is just a matter of time and practice. The key is asking the one question that matters: “Does it sound like I want it to sound?”

Use the above mixing areas to improve vocal mixes. Once the vocal channel is sounding great, reach for the reverb. Or don’t. It depends on a few things, now doesn’t it?

Chris Huff is a long-time practitioner of church sound and writes at Behind The Mixer, covering topics ranging from audio fundamentals to dealing with musicians – and everything in between.
All Posts
PrevPreviousPreSonus Control Apps Now Available For Android
NextIn The Studio: Mack On Recording Queen And ELONext
Top Stories
Explore All Study Hall