Fremont Street is where it all really started in Las Vegas. As the site of many firsts for both the city and Nevada, consider that within an area of five fabled downtown blocks, the city’s first hotel was built (the Hotel Nevada in 1906), Nevada’s first gaming license was issued (to the Northern Club), and the town’s first high-rise took shape (the Fremont Hotel in 1956).

By 1992, however, Fremont Street was no longer leading the way, a fact underscored by Las Vegas’ casino market, 80 percent of which had moved onto The Strip. Downtown was becoming downtrodden, and as the centerpiece among ideas brought forth by a group of the street’s hotel and casino operators, the Fremont Street Experience was born to help revitalize the district.

Completed in 1995, the pedestrian mall and attraction built upon a show concept revolving around a barrel vault canopy rising some 90 feet high above street icons such as the Vegas Vic neon cowboy sign and an area known as Glitter Gulch.

Extending four blocks from the foot of The Plaza Hotel on Main Street to Fourth Street on its eastern edge, the canopy – or Viva Vision Light Show as it’s known officially – offers visitors an eyeful of imagery extending well beyond even this town’s exaggerated sense of mind-bending dazzle and flash.

With each light show running about six minutes, typically from dusk to midnight depending upon the season, the canopy now draws upon 12.5 million energy-efficient LED lamps for illumination.

Street Lined With Sound
Equally impressive in its own right, audio accompanying the show is concert quality, and just like everything else in Vegas, has constantly changed and reinvented itself with an eye on making steady improvements over the years. With permanent stages now numbering three in total, added beginning in the early 2000s to eliminate the need to bring in temporary staging for special events, the mall sound system was first upgraded in 2001 and is now undergoing another complete renovation. 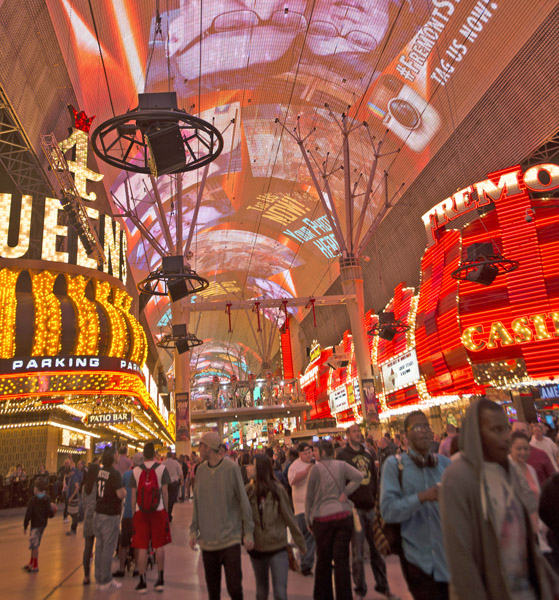 Looking down (and up) at Fremont Street, where sound to accompany the overhead video program is provided by groups of RCF HDL 20-A arrays.

When it’s finished in September, a total of 50 new clusters will line the street from above, providing sound with the aid of HDL 20-A full-range cabinets from RCF USA, along with the company’s SUB 8005-AS subwoofers. The stages will get a sonic redux as well, once again using an assortment of line array, subwoofer, and monitoring technologies supplied by RCF.

An unobtrusive oasis in this sea of sensory overload, the control room for the Fremont Street Experience lighting and audio systems looks out toward the SlotZilla Zip Line tower a mere 50 feet away. Staring out at the Zoomline, which transports riders Superman-style in a prone, flying position starting at 114 feet up all the way down the length of the Viva Vision canopy, Fremont Street Experience production manager Joe Pizzo took the ride himself before the attraction was open to the public.

“I went down the Zoomline while one of the canopy shows was actually going on,” Pizzo recalls. “I was like four feet from the lights. There’s a nice view of the audio clusters from up there, I’ll say that. You gain a unique perspective of the area of coverage you’re dealing with. Honestly, it’s a weird environment for the amount of audio we have. So many nooks, crannies, reflective surfaces…” 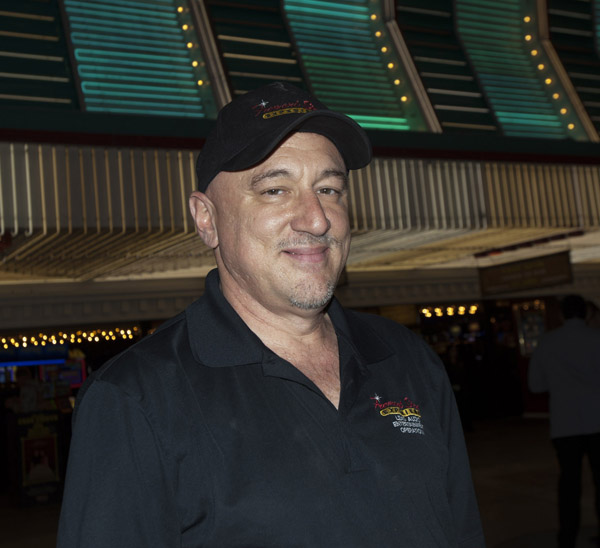 Joining Pizzo on staff at the Fremont Street Experience to spearhead the project are entertainment operations director Len Turner, manager of entertainment operations Steve Winchester, and maintenance manager Ron Ischer, who is currently doing double-duty installing the clusters and taking care of the video canopy. As of this writing, the audio upgrade is proceeding apace with four clusters being swapped out every two weeks, a process that began in March.

“We’ll be done by September 1,” Pizzo says. “We were originally going to do this in 12 to 18 months, but once the powers that be heard the first four new clusters, they told us to go at it full-throttle and be done in six. We’re cruising now with the install. It’s going to be a good summer.”