Never used them, or been burned in the past? Things have changed over the past several years...

The first group has used them for years, loves them and wouldn’t consider going back to alkaline batteries. The second group has never used them, though most have heard the horror stories and are leery. The third group has tried them and had bad experiences. The phrase, “I’ve been burned too many times, I’ll never trust them,” is one I hear often.

This discussion is primarily for the second and third groups. If you’ve been burned, I’m going to explain why, and if you’ve heard the stories, I’ll show you how to reach a different (and much happier) ending.

By way of introduction, I’ve tested many brands and types of batteries, and have gone through thousands of church services using rechargeable batteries without any significant problems. Yes, thousands of services. Far too many have had one bad experience, don’t investigate the cause, and swear them off. But in my experiences, I’ve seen just as many Duracell Procells die at the wrong time as rechargeable cells. In almost every case, it’s been my fault – I simply forgot to change them.

There are four primary things to know in order to get the most out of rechargeable batteries. Failing to understand and implement these things will guarantee bad experiences, just like trying to stretch an alkaline battery beyond its capacity. Keep in mind that rechargeable batteries behave differently than alkalines. Expecting them to be the same will only lead to frustration. But following these guidelines will lead to a successful result (and save a lot of money in the process).

Start With Quality
This is one of the key factors in getting good results. In the past 10 years, a lot of people have gone to the local Walmart, picked up a $10 pack of four nickel-cadmium (NiCd) AAs and a charger, popped them into their wireless microphones and/or in-ear monitor beltpacks, and went down in flames. That’s about 50 percent of the “bad experiences” I’ve heard.

Rechargeable batteries for wireless mics and IEM packs need to have a more modern chemistry – nickel metal hydride (NiMh), lithium ion (LiOn) or lithium polymer (LiPo). Further, AA batteries for these applications should be rated for at least 2500 mAh, and 2700 or 2850 mAH is even better. 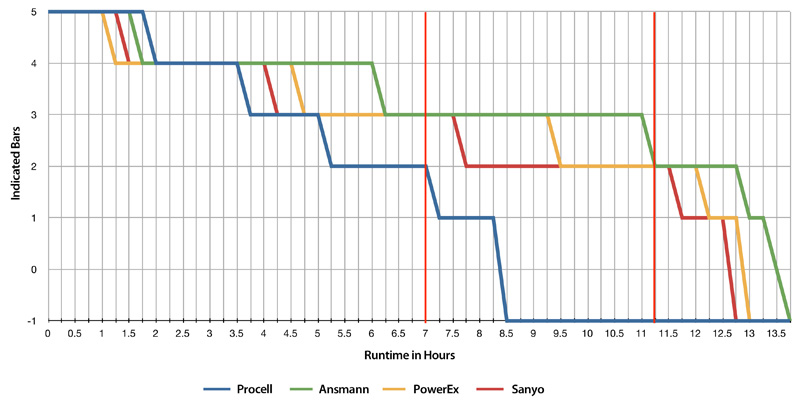 Figure 1: Test results compiled by the author over the course of a year show used rechargeable batteries last longer in use than new alkaline cells.

The abbreviation mAh stands for milliamp hours, and indicates how much energy the battery can store. A Procell is rated at about 1800 mAh, while modern NiMh rechargeables from providers such as Sanyo, Powerex and Ansmann have ratings from 2700 to 2850 mAh. They absolutely blow Procells away – I’ve done real-world testing, and most NiMh batteries will out last a Procell by 25 to 50 percent.

Figure 1 shows my test results for sets of batteries we used every weekend at my church over the course of a year. In a Shure UHF-R wireless transmitter with an SM58 capsule picking up audio roughly comparable to a vocal, the Procells were spent by 8.5 hours, while the “worst” NiMh batteries came in at more than 12 hours. (And these batteries were a year old at the time of testing.)

Proper Charging
The second key component of rechargeable batteries is proper use of a quality charger. A cheap “rapid” charger will not fully charge the cells, and it can also overheat them, shortening their life. Modern “smart” chargers are readily available, easily affordable and fully charge the batteries at the correct rate. They will also “trickle charge” the cells to keep them at peak capacity.

So what is a proper charge rate? Most manufacturers recommend a charge rate that’s between 0.5-1.0c. That is to say, the charge rate should be one half to full capacity of the battery. So if a battery is rated at 2000 mAh, the recommended charge rate is 1000 mAh and the max charge rate is 2000 mAh. A full charge will take from 1 to 2 hours at those rates, respectively.

I’ve had excellent results with chargers from Maha and Ansmann. Once the batteries are well charged, it’s important to know how to utilize them properly. And that brings us to…

Mike Sessler has been involved with church sound and live production for more than 30 years, and is the author of the Church Tech Arts blog (churchtecharts.org). Based near Nashville, he serves as the Maker of Magic for Vantage Pro, which provides design-build production solutions for churches and other facilities.
All Posts
PrevPreviousOutline GTO Arrays Power “The Experience” Large-Scale Gospel Concert In Lagos
NextDesign Principles For Distributed Systems: Implementing SubwoofersNext
Church Top Stories
Explore All Church

What are comms? Why should we have them? Learn the key aspects of comms and how to start implementing them with your team.