Constant-voltage is the common name given to a general practice begun in the late 1920s and early 1930s (becoming a U.S. standard in 1949) governing the interface between power amplifiers and loudspeakers used in distributed sound systems.

Installations employing ceiling-mounted loudspeakers, such as offices, restaurants and schools are examples of distributed sound systems.

Other examples include installations requiring long cable runs, such as stadiums, factories and convention centers.

The need to do it differently than you would in your living room arose the first time someone needed to route audio to several places over long distances. It became an economic and physical necessity. Copper was too expensive and large cable too cumbersome to do things the home hi-fi way.

Stemming from this need to minimize cost, maximize efficiency, and simplify the design of complex audio systems, thus was born constant-voltage. The key to the solution came from understanding the electric company cross-country power distribution practices. They elegantly solved the same distribution problems by understanding that what they were distributing was power, not voltage.

Further they knew that power was voltage times current, and that power was conserved. This meant that you could change the mix of voltage and current so long as you maintained the same ratio: 100 watts was 100 watts—whether you received it by having 10 volts and 10 amps, or 100 volts and 1 amp. The idea bulb was lit. By stepping-up the voltage, you stepped-down the current, and vice-versa.

Therefore to distribute 1 megawatt of power from the generator to the user, the power company steps the voltage up to 200,000 volts, runs just 5 amps through relatively small wire, and then steps it back down again at, say, 1000 different customer sites, giving each 1 kilowatt. In this manner large gauge cable is only necessary for the short direct run to each house. Very clever.

Applied to audio, this means using a transformer to step-up the power amplifier’s output voltage (gaining the corresponding decrease in output current), use this higher voltage to drive the (now smaller gauge wire due to smaller current) long lines to the loudspeakers, and then using another transformer to step-down the voltage at each loudspeaker. Nothing to it.

U.S. Standards—Who Says?
This scheme became known as the constant-voltage distribution method. Early mention is found in Radio Engineering, 3rd Ed. (McGraw-Hill, 1947), and it was standardized by the American Radio Manufacturer’s Association as SE-101-A & SE-106, issued in July 1949 [1]. Later it was adopted as a standard by the EIA (Electronic Industries Association), and today is covered also by the National Electric Code (NEC) [2].

Basics—Just What is “Constant” Anyway?
The term “constant-voltage” is quite misleading and causes much confusion until understood. In electronics, two terms exist to describe two very different power sources: “constant-current” and “constant-voltage.”

Constant-current is a power source that supplies a fixed amount of current regardless of the load; so the output voltage varies, but the current remains constant.

Constant-voltage is just the opposite: the voltage stays constant regardless of the load; so the output current varies but not the voltage. Applied to distributed sound systems, the term is used to describe the action of the system at full power only. This is the key point in understanding. At full power the voltage on the system is constant and does not vary as a function of the number of loudspeakers driven, that is, you may add or remove (subject to the maximum power limits) any number of loudspeakers and the voltage will remain the same, i.e., constant.

The other thing that is “constant” is the amplifier’s output voltage at rated power—and it is the same voltage for all power ratings. Several voltages are used, but the most common in the U.S. is 70.7 volts rms. The standard specifies that all power amplifiers put out 70.7 volts at their rated power. So, whether it is a 100 watt, or 500 watt or 10 watt power amplifier, the maximum output voltage of each must be the same (constant) value of 70.7 volts.

Figure 1 diagrams the alternative series-parallel method, where, for example, nine loudspeakers are wired such that the net impedance seen by the amplifier is 8 ohms. The wiring must be selected sufficiently large to drive this low-impedance value. 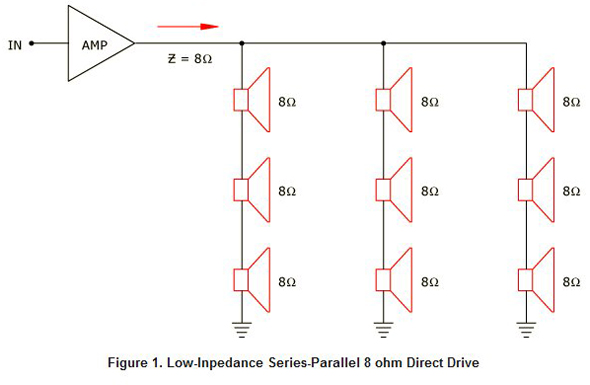 Applying constant-voltage principles results in Figure 2. Here is seen an output transformer connected to the power amplifier which steps-up the full-power output voltage to a value of 70.7 volts (or 100 volts for Europe), then each loudspeaker has integrally mounted step-down transformers, converting the 70.7 volts to the correct low-voltage (high current) level required by the actual 8 ohm speaker coil. 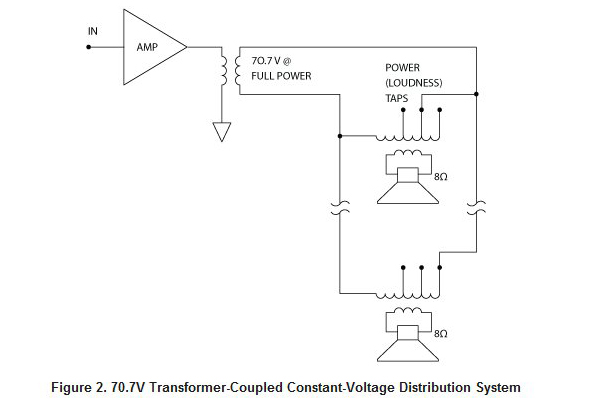 It is common, although not universal, to find power (think loudness) taps at each speaker driver. These are used to allow different loudness levels in different coverage zones. With this scheme, the wire size is reduced considerably from that required in Figure 1 for the 70.7 volt connections.

Becoming more popular are various direct-drive 70.7 volt options as depicted in Figure 3. The output transformer shown in Figure 2 is either mounted directly onto (or inside of) the power amplifier, or it is mounted externally. 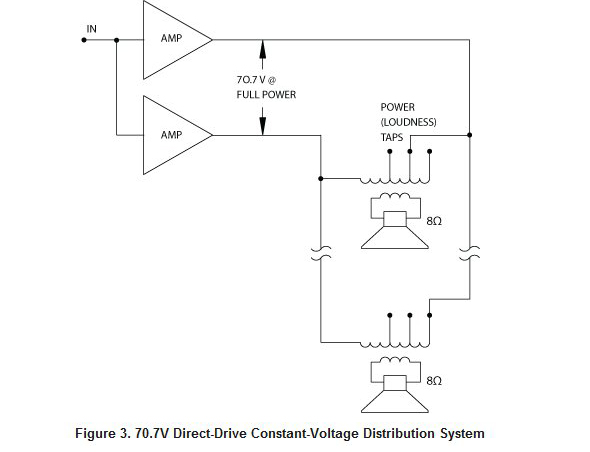 In either case, its necessity adds cost, weight and bulk to the installation. An alternative is the direct-drive approach, where the power amplifier is designed from the get-go (I always wanted to use that phrase, and I sincerely apologize to all non-American readers from having done so) to put out 70.7 volts at full power. An amplifier designed in this manner does not have the current capacity to drive 8 ohm low-impedance loads; instead it has the high voltage output necessary for constant-voltage use—same power; different priorities.

Quite often direct-drive designs use bridge techniques which is why two amplifier sections are shown, although single-ended designs exist. The obvious advantage of direct-drive is that the cost, weight and bulk of the output transformer are gone. The one disadvantage is that also gone is the isolation offered by a real transformer. Some installations require this isolation.