How to best compress without making a mess of the music you've worked so hard to make sound good?

Love it or hate it, data compression (not to be confused with audio signal compression, which is a different issue) schemes like MP3, FLAC, AAC, and other relatives have fundamentally changed music as we know it. The battle between fidelity and portability was long ago declared no contest, with convenience winning hands-down over sonic quality.

But while the ability to compress what was once a wall full of vinyl into your pocket is a boon for music consumers, it’s a bit more of an issue for those of us on the creative side of the equation. As record stores gasp for breath, and online CD sales continue to decline, artists have little choice but to make their works accessible online, and that means crunching your music.

So how to best compress without making a mess of the music you’ve worked so hard to make sound good? As with most things, the answer depends on what you’re after, and what you’re willing to compromise.

When It Comes Down To Crunch
With the Internet as our primary resource for both selling and marketing our wares, the question is no longer whether to compress, but rather how, and how much. There’s a mind-boggling alphabet soup of compression codecs available, ranging from good to barely tolerable.

Far and away the most ubiquitous compression format is MP3 (which stands for MPEG Audio Layer III), and making your recordings available as MP3s is pretty much a given if you want maximum exposure. But not all MP3s are created equal; depending on the bitrate and other factors, an MP3 can sound nearly indiscernible from the original WAV file, or as flat and lifeless as a wet newspaper. Not surprisingly, there’s a direct trade-off between file size and fidelity. 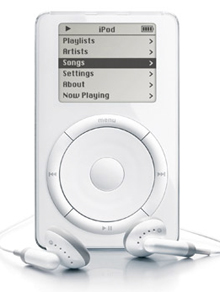 The original iPod: the portable player that launched a revolution.

Briefly, here’s how MP3 (and most other compression schemes) work. The process employs a combination of digital technology and the science of aural perception (psychoacoustics) to remove data bits from the original digital file that are considered to be essentially inaudible. These bits can include frequencies beyond the normal threshold of human hearing, sounds that are masked by other sounds, and various other “redundant” sonic information.

The point of contention with this whole concept is just how much of that data is truly inaudible. While some bits can be removed with little consequence, much of what gets stripped away can subtly affect our perception of how things sound. While moderately compressed files can deliver near-CD quality sound, too much compression can remove elusive qualities that can make a difference to how we perceive music on a subconscious level.

What Have You Got To Lose?
With any compression, some audio quality loss is inevitable. Very high frequencies are typically the first data to be eliminated, and while in theory these sounds are inaudible, their loss can rob your music of its subtle overtones, presence, dynamic range and depth of field.

The audio resolution and sonic quality of an MP3 is determined by the bitrate at which it’s encoded. The higher the bitrate, the more data per second of music. As you’d expect, a higher bitrate creates better quality audio, along with a larger file.

Generally speaking, 128 kbps (kilobits per second) is considered the bitrate at which an MP3 begins to exhibit artifacts of data compression. Not coincidently, it’s also the rate many websites use for downloads, since it offers a smaller file size with relatively minimal loss. Rates below 128 kbps are usually not recommended for anything other than spoken word recordings. Bitrates of 192 kbps, 256 kbps, or higher preserve most of the original sonic information, making them a better bet for music you care about.

Another alternative is to encode using a VBR, or variable bit rate. VBR examines the data as it’s encoding, using a lower rate for simple passages and a higher rate for more complex ones. While the resulting file size is smaller than using a higher bitrate, sometimes VBR encoding can end up compromising the audio fidelity of delicate material like a solo acoustic guitar or vocal.

Daniel Keller is a musician, engineer and producer. Since 2002 he has been president and CEO of Get It In Writing, a public relations and marketing firm focused on audio and multimedia professionals and their toys. Despite being immersed in professional audio his entire adult life, he still refuses to grow up.
All Posts
Top Stories
Explore All Study Hall