Inside the unique solutions to tame the howl of feedback

Methods for Controlling Feedback
Understanding feedback is one thing, taming it is quite another. There are three main methods used by equipment manufacturers for controlling feedback.

The Adaptive Filter Model method (similar to a method used in acoustic echo cancellation), the Frequency Shifting method and the Auto-Notching method.

Most of this discussion is on auto-notching as it is the most commonly used method.

The idea is to accurately model the loudspeaker to microphone transfer function and then use this model to remove all of the audio sent out the local loudspeaker from the microphone signal. 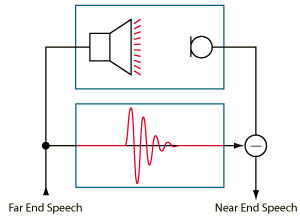 Figure 4 shows a teleconferencing application. The audio sent out the loudspeaker originates from a far-end location, and the removal of this audio from the local near-end microphone keeps the far-end talker from hearing his own voice returned as an echo.

The far-end talker’s voice is used as a training signal for the modeling. This modeling is an ongoing process since the model needs to match the ever-changing acoustic path.

During this modeling any local speech (double talk) acts as noise which can cause the model to diverge. If the model is no longer accurate then the far end speech is not adequately removed.

In fact, the noise added from the inaccurate model can be worse than not attempting to remove the echo at all. Much care is taken to avoid the divergence of the path model during any periods of double talk.

A sound reinforcement application is shown in figure 5. Here there is no far-end speech to feed the model. The local speech is immediately sent out the loudspeaker and is the only training signal available.

The fact that the training signal is correlated with the local speech (seen as noise to the training process) provides a significant problem for the adaptive filter based modeling. This is particularly true if it is trying to maintain a model that is accurate over a broad frequency range. 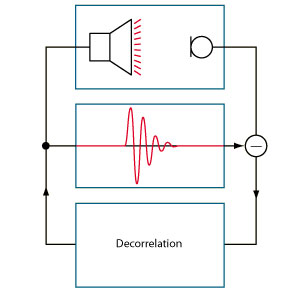 To overcome this problem some form of decorrelation is introduced (such as a frequency shift). This helps the broad band modeling process but adds distortion to the signal. As with the teleconferencing application if the model is not accurate further distortion occurs.

The decorrelation, along with any added distortion due to an inaccurate model, makes this method less appealing for some venues. The big advantage to this type of a feedback suppressor is that your added gain before feedback margin is usually greater than 10 dB.