Inside the unique solutions to tame the howl of feedback

Editor’s Note: This article was originally published through The Rane Library in 2005, yet the information is as relevant now as it was then.

Acoustic feedback (also referred to as the Larsen effect) has been roaming around sound reinforcement systems for a very long time, and everyone seems to have their own way to tame the feedback lion.

Digital signal processing opened up the microphone to some creative solutions, each with its own unique compromises. This article takes a closer look into that annoying phenomenon called acoustic feedback and some of the DSP based tools available for your toolbox.

The measured response of the output of a system relative to its input is called its transfer function. If the measured open-loop response of a system has constant magnitude across the frequency range of interest you can model the system using a level control followed by some delay.

Looking at the transfer function of a simple level change and delay element can provide insight into the behavior of acoustic feedback in real world situations. 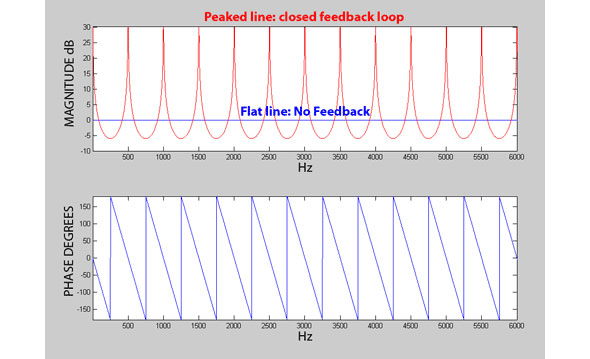 The top half of Figure 1 compares two magnitude responses. The flat (blue) line represents the magnitude of an open-loop system (no feedback) with unity gain (0 dB) and 2 ms of delay. The peaked (red) curve is the same system after the feedback loop is closed.

The closed-loop has peaks that correspond with zero degree phase locations shown in the lower half of the figure. The closed-loop valleys correspond with the 180 degree phase locations. Feedback is a function of both magnitude and phase. Even though the open-loop gain is the same at all frequencies, only frequencies that are reinforced as they traverse the loop (near zero degrees of phase shift) will runaway as feedback. 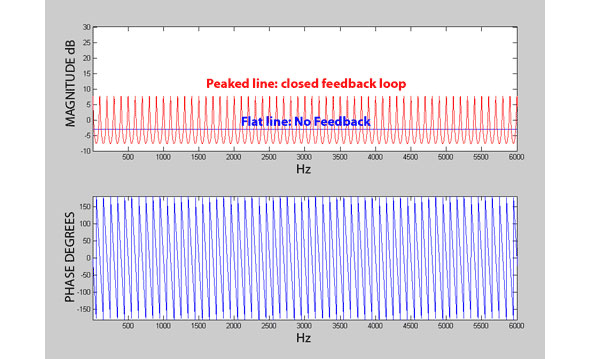 Figure 2 shows the effects of reducing the gain by 3 dB and increasing the delay to 10 ms. Notice that the closed-loop gain reduces significantly (more than the 3 dB of open-loop attenuation that was applied) and that the potential feedback frequencies (areas of 0 degrees phase shift) get much closer together.

The Development Of The McCune JM-3 Loudspeaker: Part 2, Additional Components