VERA enclosures and S33 subwoofers support "10 days of madness" under strict urban noise regulations in the city of Ghent.

Drawing an estimated two million people each year into the Belgian city of Ghent, Gentse Feesten is a sprawling extravaganza of free music and entertainment across dozens of stages and hundreds of acts. But within the many town squares that are occupied by the festival, technical production crews must observe strict urban noise regulations while attempting to cover huge audiences.

For the 2017 festival, this challenge was highlighted in the historic square of Sint-Baafsplein, where audiences of up to 8,000 people were served by a system comprising no less than 90 TW AUDiO loudspeakers.

With roots stretching back over 174 years, Gentse Feesten is known locally as “10 days of madness,” a description that would likely be embraced by the technical crews who ensure the event’s success. Prominent among them is Deinze-based TW AUDiO partner Euro PA, led by founder Peter Vanhove, whose own history with the festival is extensive, covering 17 years of collaboration.

For the 2017 edition, the company provided full technical set-up and support for three stages – Sint-Veerleplein, the newly introduced EDM-focused House Of The Bull stage, and the huge Sint-Baafsplein. 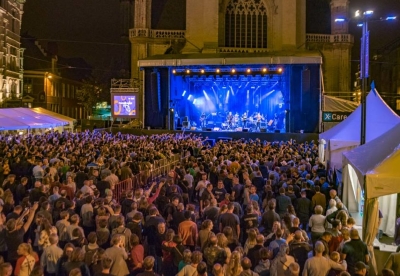 “For Gentse Feesten, throughout the whole city of Ghent, wherever there’s a place to put a stage, there is a stage.” Vanhove explains. “But the festival also takes place in the historical center of Ghent, where approximately 200,000 people live, so the challenge is always to get the most sound coverage possible onto the audience, and as little over-spill as possible onto the surrounding buildings.”

The challenge is particularly pronounced in Sint-Baafsplein, he continues. “It’s one of the four big town squares, so it’s very prestigious. It’s also very big, approximately 110m long and 60m wide, and it’s completely surrounded by old houses and churches. The city has very strict upper dB limits. The levels are permanently monitored and no violations are tolerated – it’s treated as an environmental offence. But we had to throw around 90m to cover the entire audience so we needed a lot of power.”

“We deployed 12 VERA36 enclosures per side,” Vanhove explains, “and for low-end we used 16 S33 subwoofers configured in end-fire mode and positioned in eight double stacks in front of the stage. A further four BSX infras, again in end-fire mode, were also used, with two under the stage and two positioned in front.” 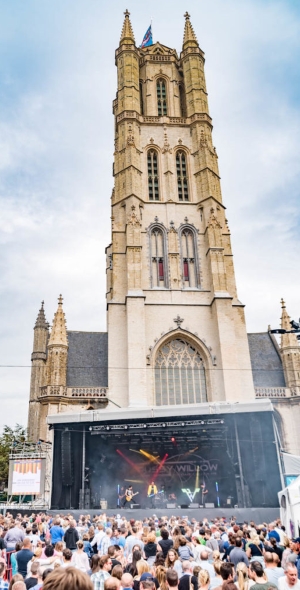 In addition, six VERA10 enclosures were deployed as front-fills, plus four S30s as side-fill subs and two T24Ns as side-fill tops. A further four T24N enclosures served as the main delays, ensuring that full audience coverage was attained within the mandated noise restrictions. Finally, 16 C15 wedges were deployed on stage for artist fold-back, alongside two S18 subs for drum monitoring. Amplification for the expansive system included 13 Lab.gruppen PLM12K44 for the main stage and delays, plus six Powersoft X4-Dante amps for the monitors.

“The delay stacks allowed us to be precise with the performance of the main system while still achieving coverage at the back,” he says. “Everyone told us that we had the best sound of the four main squares.”

Front of house engineer Tim Lenssens was quick to praise the system: “Since the first time I mixed on a TW AUDiO system, I’ve been a big fan. It offers a very clear, warm sound with a nice tight sub. Even in a difficult environment it’s possible to get a very satisfying result.”

Marc Lekens, front of house engineer for the Skyblasters, agreed: “I was pleasantly surprised with the VERA36 system at the Gentse Feesten 2017. It delivers very good coverage and crystal-clear sound. It’s in my top three best systems.”

For the 2017 festival, the main stage in Sint-Baafsplein was joined by the smaller, DJ led House of the Bull stage, which continued long into the night after performances on the main stage had ended. Serving the crowd were six VERA10 enclosures plus six S18 subs in cardioid mode.

Elsewhere, the smaller Sint-Veerleplein stage drew smaller crowds of 800, but nevertheless shared the challenges of its bigger sibling. “Sint-Veerleplein was much the same as Sint-Baafsplein, but with even lower dB restrictions.” laughs Vanhove. “It’s a small market place located in front of Gravensteen Castle. Once again, TW AUDiO ensured we covered the whole audience area with a compact system that everyone thought sounded great.”

“There is a lot of pressure because the organizer is there, the visiting engineers are there, the sound limits are in place and we have to consider everything,” Vanhove reflects. “But everyone was very happy with the 2017 festival and how TW AUDiO performed.”