“We needed a system that was able to achieve high resolution audio through the extreme dynamic range of acts on the stage, whilst also giving us tight enough pattern control to stop feedback." - Alex Lindsay, Audioforum

Turbosound Aspect loudspeakers were utilized to provide sound reinforcement for the Acoustic Tent at the recent 2009 Glastonbury Festival, in support of live performances by a diverse group of artists such as Fairport Convention, Ray Davies, Hugh Cornwell, Georgie Fame, the Penguin Café Orchestra and the London Community Gospel Choir.

The system serving the Acoustic Tent, provided by Bristol-based Audioforum and specified and manned by Turbosound Design Engineer Danny Cooklin, was comprised ground stacks of four Turbosound TA-890H, four TA-890L and two TSW-218 per side, with two further ground-stacked TSW-218 positioned centrally beneath the stage and TA-500 Aspect Wide cabinets used for onstage side fill.

“For the number of cabinets used the coverage in the Acoustic tent was exceptional,” says Cooklin. “The sound level and balance was consistent throughout the audience and projected well to the back without traveling too far outside.

“We had an even bass pattern and the system was very clean all the way through the mid-range to the super high frequencies, with great dynamics in all areas of the spectrum, which is exactly what was required.”

“Audioforum was very proud to become the new sound provider for the Acoustic Stage at last year’s Glastonbury,” adds Audioforum’s Alex Lindsay. “We needed a system that was able to achieve high resolution audio through the extreme dynamic range of acts on the stage, whilst also giving us tight enough pattern control to stop feedback.

“We have been using the TA-500/TSW-218 system since its release, and knew that even though it would cover the quality and SPL requirements of most of the artists on stage, we would need more power for the larger acts. So we knew turning to Turbosound to add to our hire inventory was the right way to go. 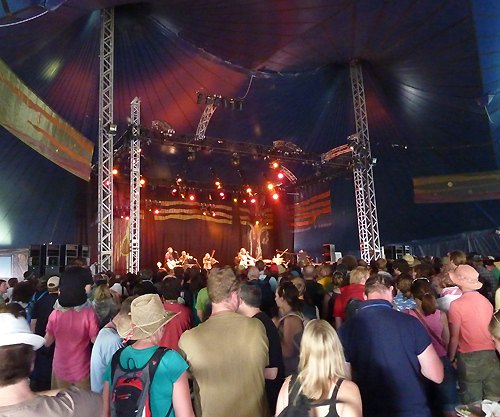 Another view of the Acoustic Tent at 2009 Glastonbury, where Turbosound Aspect loudspeakers provided the coverage (click to enlarge)

“The Acoustic Stage is the largest indoor arena at Glastonbury. This year, during Ray Davies’ set, the tent was crammed with 5,000 people, with another 5,000 outside the tent down to the bottom of the field. This shows the system could throw far enough without delays.

“Our engineers, visiting engineers and the stage coordinator were as equally happy with the performance of this year’s Aspect rig as they were with Flex in line array configuration last year, which to me demonstrates a key point: in that environment, the differences between the two systems’ performance wasn’t large enough to make either of them superior overall. They were both equally good, just slightly different.

“When you get an opportunity to be part of the biggest festival in Europe, with the highest density of industry professionals to notice your mistakes – let’s face it, in this game everyone’s second job is sound engineer – you can’t afford to risk your reputation on using anything but the best. So far, I think we’ve done that.”