"When line arrays started to prove themselves and show up on riders, we started to look at all manufacturers." - Jack Hayback, CCPA Technical Audio Director

Adaptable Technology
With the dynamics of the venue, the NEXO system is adaptable and changeable on order to adjust to both large and small setups, with the GEOsoft software supplied with the arrays helping the process.

“The great thing that the NEXO design team has done,” explains Hayback, “is to make sure that what you see in the software is what actually happens when you put the loudspeakers up in the air. The D10s have a forward firing 12-inch loudspeaker with a Directivity Phase Device (DPD) in front of the cone (which essentially cut the 12-inch loudspeaker into two 6-inch loudspeakers), twin side firing 8-inch loudspeakers (for cardioid directivity) and a Hyperboloid Reflective Wavesource HF Device. You don’t get that boom-iness or the resonating sound from behind it that you would with a normal loudspeaker system.

“Also, in the top bumper, the system has a digital inclinometer and a high power laser called GEO-sight,” he continues. “When the rig is flown to trim you have the ability on the floor to see the top angle of the bumper and can confirm it with a laser sight. It is already built into the bumper and super easy to use.

“When used in conjunction with the GEOsoft software, you can use the GEO-sight system to see in the space if the laser is pointing to the area that you programmed in the software and confirm that the measurements have been input correctly. If they have, you will find that it is exact and perfectly spot on.”

Cerritos uses five NEXO NX242-es4 processors with EtherSound. Four are in the main PA amp racks. Each of the two racks has two NX242-es4s, one for GEO D10 hi-low flown boxes, one for the GEO subs and the CD18’s. 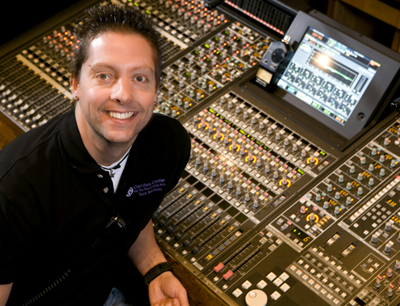 The fifth processor is in a separate rack and manages the GEO D10s mounted on the GEO subs on the floor. These are used for imaging purposes. The flown GEO D10s cover from the first rows to the upper balcony very nicely and the addition of a GEO D10 on the sub on the floor provides a nice imaging feel for the audience.

“We have a 70-volt upper delay ring for the three balconies if needed. We also use four Yamaha IH2000 (hi-mid boxes) to help fill in some of the gaps,” says Hayback. In addition to the GEO D10s, across the front of the stage are four Yamaha Installation Series IF 2205 loudspeakers for front near fill.

Power for the NEXO rig comes from Yamaha Tn Series amplifiers. The house PM1D digital console has both analog and digital output via DIO8 and AIO8. The DIO8 has two AuviTran AVY16-ES digital output cards and feeds the Yamaha DME 64s, and then goes out of the DME64 to all the NEXO NX242-es4 processors on both EtherSound and analog copper wire. There are EtherSound inputs on the back of the NX242-es4s which is the digital connection into the racks. Out of the NX242-es4 is the analog signal from the processor to the amplifiers. 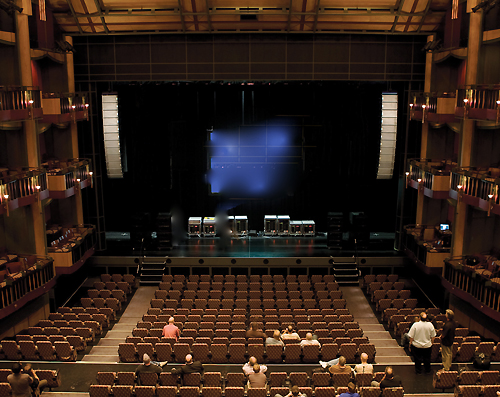 Another view of the NEXO GEO arrays in place at CCPA. Click to enlarge

Digital Interconnectivity
The amps will also be used in the theater’s monitoring system, which currently consists of a PM5D console whose analog lines go into Yamaha SP2060 processors for monitor wedges, sidefills, drum subs, and all of the IS Series speakers used on stage for monitoring. The audio crew’s goal is to use the EtherSound backbone to feed the monitor amp racks and eliminate existing analog lines to provide a complete digital interconnectivity.

“Although a lot of people are exposed to NEXO and understand what Yamaha and NEXO are up to, many are coming to Cerritos and hearing a system for the first time,” concludes Hayback. “Engineers have walked away smiling and want to add it to their riders. Both Lloyd Kinkade and Joe Rimstidt of Yamaha have been my point men for knowledge and information. It’s been basically like having NASA available to me. There isn’t anything they don’t know about the product, and having the ability to contact them at any point has been a most comfortable feeling for a person in my position.

“These guys have been there every step of the way. My goal is to build a complete digital audio network with central control located at front of house. With the help from Nexo, Yamaha, and EtherSound, we expect to have it all completed within the next few months.”