"When line arrays started to prove themselves and show up on riders, we started to look at all manufacturers." - Jack Hayback, CCPA Technical Audio Director

Since 1993, when the Cerritos Center for the Performing Arts (CCPA) first opened with a performance by Frank Sinatra, the theater has hosted a myriad of performers from Bill Cosby and Whitney Houston to Rick Braun, Tony Bennett and Jewel.

In the beginning, the CCPA’s sound system did not meet the technical requirements to fill the riders of the wide variety of performances being presented. Later upgrades added a Yamaha PM1D digital console at front of house and a Yamaha PM5D digital console for monitors, but PA coverage was lacking.

“The theater is a multi-purpose space, with configurable walls, floor, ceiling and seating wagons. Everything here moves,” adds Hayback. “We have several different configurations: Lyric, Arena, Concert, and Recital, among others. The standard proscenium configuration is called Lyric with a seating capacity of nearly 1,500 seats.”

The first four rows of Lyric are removable and can convert to an orchestra pit or a thrust stage. With the thrust stage in place, a configuration called Recital is created.

If more capacity is needed, the technical staff can move all the pieces and transform the space into a setup they call Arena, which is loosely based on a typical arena with a flat floor and a raised Wenger platform on one end. Arena setup seats nearly 2,000 patrons and is the most popular.

Concert configuration, a mixture of both Lyric and Arena, is a configuration used mostly for large symphonies and orchestras with a wide proscenium and side box seating.

Loudspeaker Options
“CCPA had been renting PA boxes in the early 1990s,” says Hayback. “We did purchase a system early on, but at that time, line arrays were new and there weren’t many available to choose from. When line arrays started to prove themselves and show up on riders, we started to look at all manufacturers.

“The system we had was great, but when put up against the NEXO GEO T Series and S Series, I really was blown away. We need to please visiting engineers and fill the need of their riders. It isn’t about what I wanted, but what works for the space and for their productions.”

At the time, the GEO D10 vertical tangent array was new, and Yamaha Loudspeaker Product Manager Lloyd Kinkade and his team put an evaluation system together and brought it over for a test drive. 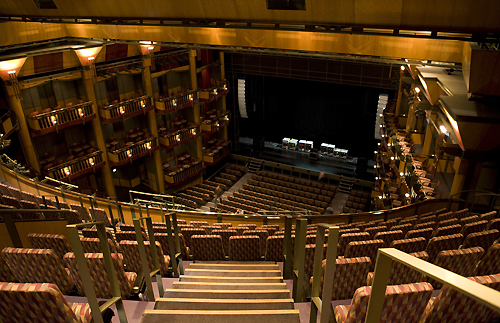 Perspective of the Cerritos Center with new NEXO line arrays in place. Click to enlarge

“The GEO D10 rigs and flies very easily and for us that is a must. Our system has to land for each configuration and changeover,” Hayback explains. “At this point, we’ve done a variety of shows and setups, and many guest engineers have come through and used it. Everyone has been very impressed with this new technology and enjoyed mixing on it.”

The cardioid line array design of the GEO D 10 fit the needs of CPAC, with many shows incorporating open miking and much of the extra energy redirected back into the house rather than on the stage.

In the Arena setup, typically there are 12 GEO D10s per side flown,with two GEO subwoofers on the floor per side and one GEO D10 on top of the GEO subs for floor for fill. Four Nexo CD18 loudspeakers are evenly dispersed under the stage.