"I have to really mix every song and Toby keeps me real busy, which makes a 90-minute show seem like 30 minutes." - Dirk Dunham, mix engineer, Toby Keith tour

Dirk Durham and Earl Neal sat comfortably on a bus outside the Rockford Metro Center in Northern Illinois prior to the next to last show on Toby Keith’s “Biggest & Baddest Tour.”

This was also the calm before the twister. When Toby Keith takes the stage in 90 minutes, it’s a controlled audio stampede for the duration of the evening.

That morning entering the small arena, the first impression of the PA was “That’s a lot of PA!” A JBL VerTec rig was flying, arched like a skydiver. The system features 56 tops and 40 subs.

Before departing to coordinate his wireless, Neal walks us to the Front of House position and we get another welcome from Durham. He’s the other amigo on this award-winning live audio team.

Durham winks with the grin of a pastured cowhand and an Okie drawl, “Really I’m fortunate,” he says. “Toby will blow the back of the capsule of the mic out. It’s just keeping him up above everything else. You’ll see tonight – it’s a rock show. He’s all over the place. The band is flying around and with him singing, he can get a lung full of air and dominate the whole stage.”

Durham’s been with Keith since March of 2000, and he truly loves his gig. Asked if he got the job because he’s from Oklahoma, he smiles, winks again, and replies, “Ya know the up thing was, I had been around with other bands through the circuit – Dallas, Tulsa, and stuff playing back-to-back and touring. He had known of me. I knew who he was. 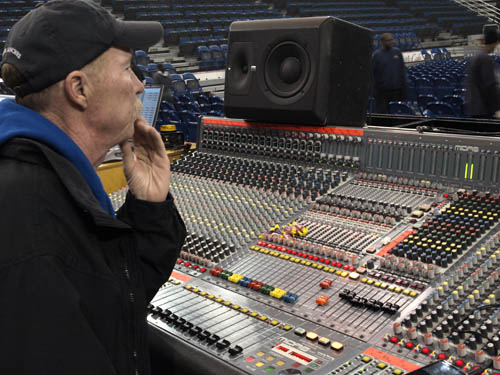 Dirk Dunham prior to showtime at his Midas XL-4 console. (click to enlarge)

“I had retired in ’96 and went home and was ranching when Toby’s production manager called me and asked if I wanted to go see what they thought of me and if I liked them. We hit it off right away. And I love it. I have to really mix every song and Toby keeps me real busy, which makes a 90-minute show seem like 30 minutes. I’ve tried several digital desks but he’s such an active performer and it’s such a dynamic show with the band and all, I have to use an analog console. I can’t just set it and leave it alone.

When I started with Toby, I went out and bought all his CDs just to study his songs. After the first night I mixed him in Michigan, I almost had to throw all the CDs in the trash. His live performance is nothing like the CDs. There’s so much energy live. It’s a great gig.”

Durham’s and Keith’s vendor of choice is Sound Image, with the decision-making process to use the sound company a collaboration.

“We had a weekend off from the Brooks and Dunn tour,” Durham continues. “Toby said, ‘Dirk, let’s go to the Aerosmith concert,’ and that’s what we did. After the show Toby said, ‘That’s what we need, that PA.’ So, I called up Dave Shadoan and we ended up with the first VerTec rig that Sound Image bought. Everyone at Sound Image has been like family to us. Everett Lybolt, Dave Shadoan and Ross Ritto take real good care of us. We never have to worry about a thing.”

Durham says he uses the same system regardless of the size of the arena. 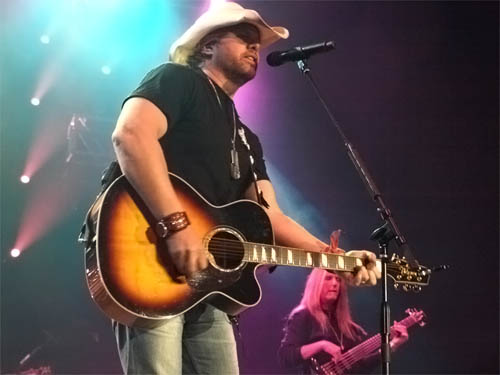 Standing at the Midas XL-4 at Front of House for Keith’s mix, he talks about the tack in his stable. “Seems that just about every digital desk I’ve been on, people try to get it to sound like an XL-4. So why use an imitation when you can have the real thing? I’m spoiled in the fact that they don’t cram me for space, so it works for me. For effects I use a Lexicon 960L and a TC 10000. In my drive rack are all dbx 4800s. It’s all Crown IT (I-Tech) powered.”

When Durham needed to get to work on his Front of House footprint, I drifted to monitor world where Neal was just wrapping up pulling his frequencies.