Thousand Oaks Civic Arts Plaza, one of the largest performing arts centers between Los Angeles and San Francisco, has upgraded the sound systems at its two theaters with L-Acoustics loudspeakers.

Rat Sound Systems of Camarillo, CA supplied the equipment and assisted with installation, while L-Acoustics provided system design support from its US headquarters in Oxnard, CA as well as trained the team at the theater.

This is the second sound system upgrade since the Thousand Oaks Civic Arts Plaza opened in October 1994. More than 3 million people have patronized the 3-acre complex during the past two decades, with over 300,000 patrons and 50,000 children attending more than 400 performances annually.

“Over the past 20 years there have been major improvements in audio technology,” says executive director Barry McComb. “As a venue that strives to provide superior entertainment experiences for our patrons at every performance, the installation of our L-Acoustics sound systems has elevated the quality of amplified performances, lectures and other events to a new level.”

“The Kavli Theatre is quite live and the side walls are reflective, so we needed a way to control horizontal dispersion and avoid unwanted reflections. Tight vertical control for theatrical, orchestral and other performance events was also a priority,” explains L-Acoustics national manager of installation projects Dan Palmer. “Special attention was paid to the Founders- and Mezzanine-level boxes, where patrons sit quite close to the arrays and were being hit hard by the previous system. K2’s Panflex was adjusted to address these issues.”

Additionally, two arrays of three SB28 dual-18-inch subwoofers in a cardioid configuration are placed on either side of the stage deck proscenium. Six 8XTi coaxial point-source loudspeakers provide front fill, with two arrays of three ARCS Wide loudspeakers available for in fill. The entire system is controlled, monitored and amplified by 11 LA8 amplified controllers.

According to Michael Tachco, technical director for the Fred Kavli Theatre, “The coverage of the new system is very even in all parts of the hall. Listening to an amplified performance from a seat at the back of the main floor or the side of the balcony is as good as anywhere in the house.”

Jonathan Burke, resident sound designer at Cabrillo Music Theatre, UCLA School of Theater, Film and Television, who was recently at the upgraded Fred Kavli Theatre with a production of the hit Broadway musical Memphis reports, “The system is truly amazing and a total pleasure to work with. We have such control over everything. The smooth response in the space is amazing. The show is able to get loud but not painful and we know exactly what to expect. The low-end control is also fantastic. I had never cared much for the lows on a musical, but now it sounds so good that dialing-in the band was a lot more fun than ever before.”

In the multi-use Scherr Forum Theatre, which hosts a broad range of productions and is also used for council meetings and other civic events by the City of Thousand Oaks, the main house system comprises two flown ARCS WIFO hybrid arrays that combine Wide and Focus elements. The left and right hangs each include one ARCS Wide and two ARCS Focus enclosures topped by an SB18i subwoofer. Two SB18i subs, positioned either side of the stage apron, provide additional low frequency extension.

“It was a privilege to be selected as the vendor and install team for the Thousand Oaks Civic Arts Center,” states Rat Sound general manager Paul Freudenberg and project manager, Daniella Peters. “L-Acoustics products are a mainstay of our touring operation so it was an honor to be able to apply our experience to this significant cultural venue so close to our home base. We look forward to being able to support both theaters with their future needs.” 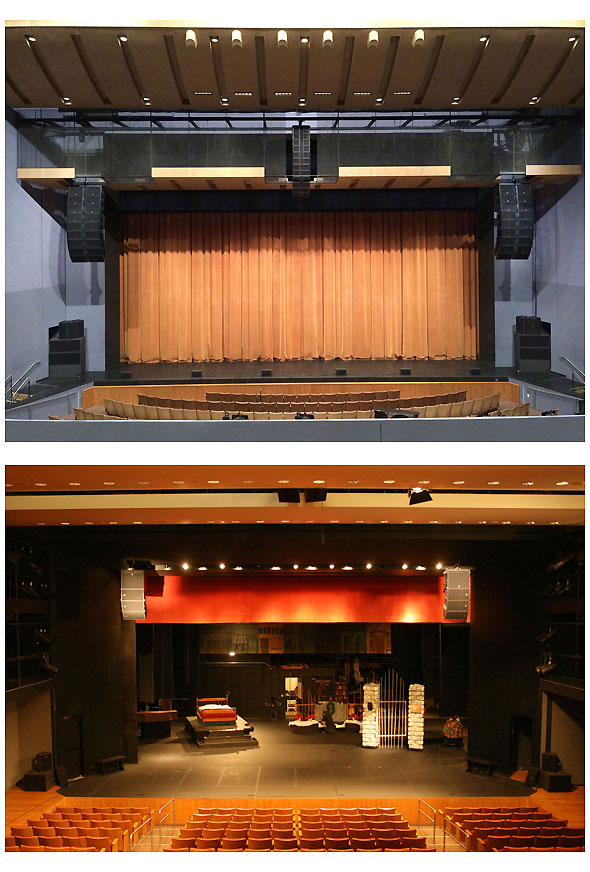