The Philip Glass Ensemble, along with members of the New York Philharmonic Orchestra and the Collegiate Chorale symphonic choir, recently performed Glass’ powerful score for the 1982 landmark motion picture “Koyaanisqatsi: Life Out Of Balance” as the film screened at Avery Fisher Hall in Lincoln Center.

The two exclusive live performances (and screenings), held on consecutive nights for sold-out audiences at the 2,738-seat home venue of the Philharmonic, presented some sound reinforcement challenges.

The hall does not have a house system, yet the Philip Glass Ensemble, founded by composer Glass in the late 1960s to perform his experimental minimalist music, is always amplified when playing live.

As a result, Dan Dryden, long-time front-of-house engineer for the ensemble, worked with Audio Production Services of Amawalk, NY to design a reinforcement system to serve the unique needs of the event while fitting within the scope of the hall.

“With an event like this you want all of the instruments, acoustic and electronic, to sound like they belong together,” Dryden explains. “The sound system needs to be clean and consistent, in addition to being capable of covering the entire hall without impeding any stage site lines.”

He adds that, in general, he prefers the footprint of compact line arrays, and following a site review, decided that approach would work for this project as well. The choice was the compact RCF TT+ Series, with single arrays each comprised of 10 TTL31-A modules flown left and right, attached to the overhead stage grid. 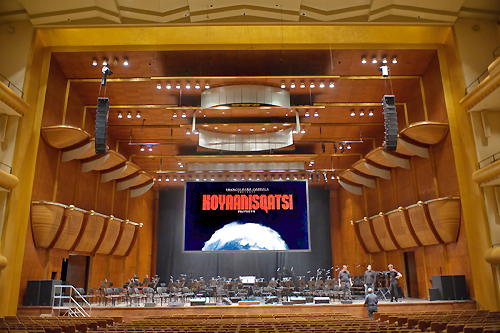 A view of Avery Fischer Hall with the main RCF TTL31-A arrays flown to each side of the stage. (click to enlarge)

“When specifying systems for the ensemble I’m looking for smaller line arrays with flat frequency response,” explains Dryden. “These were perfect. The low-mid frequencies are rich and warm, and the coverage was excellent.”

The overall footprint of these arrays indeed was relatively miniscule, measuring just less than two feet wide by only about 10 feet deep. The self-powered, 2-way active line array modules are outfitted with a single-8-inch cone driver and three compression drivers feeding a horn with horizontal dispersion of 100 degrees. They proved capable of covering all four levels of seating (main and three balconies) as well as boxes.