The Real Thing With Duran Duran

Success is in the details, according to the sound team behind the iconic band's current concert tour.

True, they may have begun as a group of art school, experimental rockers from the UK that quickly rose to superstardom in the 1980s on a wave of polished good looks and MTV-driven hits, but those that initially dismissed Duran Duran as simply another manufactured, throw-away pop group got it dead wrong.

Still going strong today with four of its five original members intact, the band has placed 21 singles on the Billboard Hot 100 to date, sold over 70 million records, and continues to burn it up out on the road with this year’s Paper Gods Tour, supporting an album of the same name released last September.

As in the past, sound reinforcement this time out was provided by Eighth Day Sound (Cleveland), with veteran front of house engineer Snake Newton showcasing both his own skills and the power of an Adamson Systems E15/E12/E119 rig from behind an Avid VENUE | S6L, a console also being used on the tour by monitor engineer Charlie Bradley.

With the tour currently playing an eclectic mixture of sheds and arenas, a typical configuration of the arrays utilizes 10 E15 mains hanging in the mains per side along with two or three of the wider dispersion E12s underneath.

Arrays of six E119 subwoofers additionally go airborne, with another half-dozen relegated to the ground. Coverage is further extended with out-firing arrays, flown next to the subs, made up of E15s over E12s. 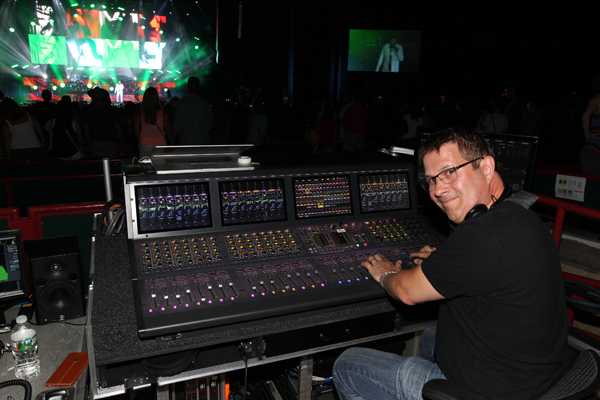 “I’m a big fan of 15s, especially when you have big drums and Les Paul sounds like this show does” Newton admits. “After a couple hours of using 12s for this sort of music it starts to sound like they’re trying too hard. These boxes do a great job, all while keeping our footprint fairly compact. They aren’t a one-trick pony either: The top-end is really sweet, they are very hi-fi. Overall they are quite capable of doing a lot more than just providing big, beefy brawn.”

Fitting It All In
At this point in their career, Duran Duran has such a huge catalog of material that it’s next to impossible to play all of their hits within the confines of a two-hour show and still have time to work in new material as well. 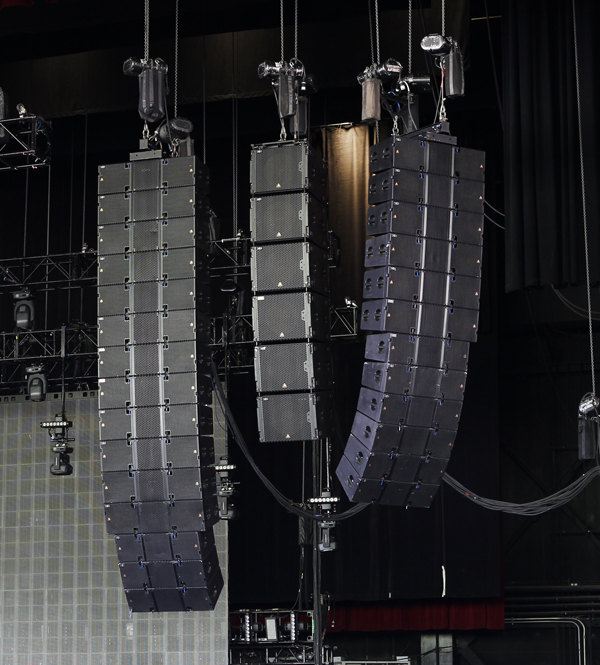 One side of Adamson Systems E Series arrays in place prior to a recent show.

“They’ve been through so many incarnations in terms of their music,” Newton notes, “and reinvented themselves so many times. That’s really a big part of the challenge here. Your drum sounds, for example, have to match the drum sounds of the era of each song. Effects, the gating, tonality of the instruments, it all changes constantly.”

Even a casual listen to the set list illustrates Newton’s point. On a song like “Ordinary World” from the band’s mid-career, it’s not very warm sounding at all – the snare drum explodes in a burst of gated reverb, the melodies are raw and edgy. Newer material, conversely, is more disco-punk, with dry, sort of fat sounding drums. Then there are songs like “A View To a Kill” which doesn’t sound like any other, and tunes developed with hip-hop producers.