Really Different
Studio guys will tell you that a great technique is using a large diaphragm condenser (LDC) several feet away, often constructing a tunnel of sound, deadened to maintain isolation.

For live gigs this has obvious limitations, combined with the fact that they usually get increasingly omni-directional at low frequencies.

Some engineers have had good results using an AKG C414 fairly dose to the kick drum’s sound hole for lighter acts, but most chose to use their 414 inventory for other tasks before dedicating one to kick.

It’s worth noting that single-diaphragm LDCs like the C3000 maintain their directional pattern in the low end, making them better candidates for all kinds of full-bandwidth live applications, besides being less expensive.

The Audio-Technica AE2500 dual-element cardioid mic places a dynamic and a condenser element in the same housing. This invention borrows from the studio ploy of taping a 57 and a 451 together so they’re time-aligned, and capsules are borrowed from A-T products in both categories.

Some find it has more potential on snare and guitar cabinets, but many swear by it on kick drum. And yes, it costs about the same as two good microphones. 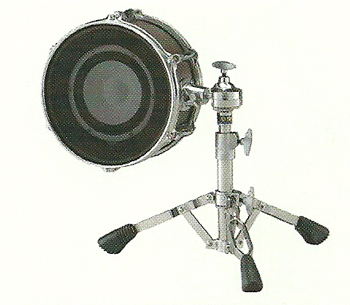 A while back, Yamaha introduced the SKRM SubKick, a 10-mch drum shell with a 6.5-inch woofer inside. This kick drum mic’ing idea is borrowed from the old-school studio approach of using the woofer from a Yamaha NS10 near-field studio monitor (usually available because its tweeter was blown) as a microphone for the kick drum.

Different results are obtained depending on whether the woofer is in the NS10 cabinet to dampen its response, or is in “free-air.” The frequency response of the woofer naturally rolls off the highs, but this technique has always been used to compliment another, more traditional mic’ing technique, providing a fatness and thickening that complements the transient of a condenser.

It’s not for everyone, but many think it’s “da bomb.”

Earthworks Kickpad/SR25 combination is a kick drum solution from the company’s three-mic condenser drum mic kit. Rather than design a mic specifically for kick drum, the company provides an in-line XLR barrel for its SR25 cardioid condenser which pads it down and contours its frequency response.

The KickPad can be bought separately and can be used with other mics, especially helpful with condensers, and it can also be used with dynamics, but pre-contoured kick drum mics get far less benefit from a double dose.

Many consoles can achieve the same results by putting in a pad and a mid-range cut, as sometimes they’re just not options on the desk (i.e. PreFade = PreEQ).

Now that we’ve established two inputs as standard, the next frontier is obvious. Someone recently joked that it’s about time we added a third input, but I agree wholeheartedly.

We’re best able to evaluate various combinations and new microphone choices by simply allowing for a third experimental kick drum mic in the input list. You may find that you can replace the two mics you’ve been using with a single mic that works better. Alternatively, you may prefer some two-mic combination to what you’ve used all along.

How else are you going to find out unless you put some play time and space into the daily grind? Most engineers plan an hour between line check and sound check.

Why not invest a little of that time every day to learn more about microphones that make it go bang!