Optimized Reponse
In the 1990s, Shure debuted the Beta 52, the company’s first purpose-designed kick-drum mic, with its response specifically optimized for the task at hand using an internal EQ network.

Its integral mic stand adapter, oversized body (inside is a regular-sized capsule) and passive LC network are strategies that have been copied by many over the last decade. The idea was to make it easier by eliminating the need for EQ.

Shure even knocked itself off, after watching others do so, with its own PG series of inexpensive mics, and its PG52, at half the price of the Beta 52, is about what you’d expect. There have been many imitators of this ‘large body means big sound’ with varying results, but the concept of a contoured response, customized to the needs of the drum is here to stay.

Manufacturers have gotten caught up in ‘big mic’ aesthetics, as users are easily invested with the false notion that bigger is better for a kick drum, or that a large diaphragm is better for low frequencies, which is only true in some cases for condensers – other factors really do play a part in determining how well a mics response is tailored for kick drum.

As such, there’s a proliferation of sub-$100 kick drum mics, and the old chestnut that ‘you gets what you pays for’ really applies. I’ve rarely found a cheap mic I could recommend to pro users, while a quality microphone will serve its owner for years while retaining its value. 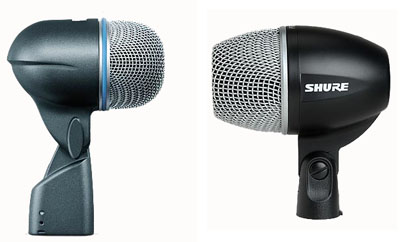 New Kicks In Town
The following modern kick drum mics are favorites, and are designed to get a sound engineer most of the way there before ever touching the EQ. In efforts made great mics for floor toms, they never quite delivered the goods for kick drum.

The Audix D4 is just one example, but I can single it out because the company did such a great job on the D6, which immediately replaced the M 88 as a personal favorite.

The D6 is a second generation cardioid kick drum mic with a tight low end and smooth contoured response.

The beyerdynamic Opus 99 and M99 are really the same mic. hypercardioid and contoured with passive filters, but the M99’s switches allow the engineer to independently turn off the mid-cut and HF boost, making it useful for a wide range of applications beyond kick drum.

The Electro-Voice N/D 868 is a cardioid kick drum mic that sounds somewhat like an RE27, but with pre-contoured EQ built in. The Sennheiser e602 and newer e902 are both contoured cardioid dynamic kick mics, but the e902 has more high-end snap.

Look Ma, No Stand
We know that placing mics inside the kick drum offers a degree of isolation. The Randall May drum mic system permanently mounts a microphone inside a drum. 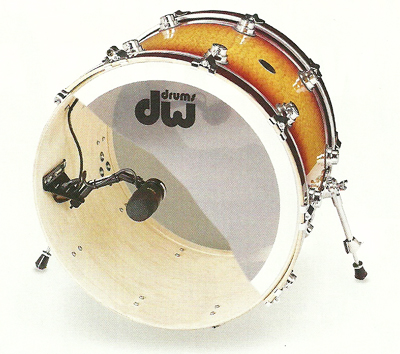 The Randall May drum system—note XLR connection on outside of drum shell.

An armature attaches to existing drum lug hardware inside the drum, with an XLR on the drum shell. No stand required. You may have seen kits with this system without realizing it, because you can’t see these mics. This is a standard option from DW Drums, as well as a few boutique custom shops.

Mounting the mic inside adds presence, increases isolation and reduces cross-talk, and also keeps the mic out of the way so it doesn’t get hit or bumped. Most of the above mics are available as May installations.