EQ’ing the kick drum is a skill with millions of man-hours invested, yet the simple truths are that mids must be cut, while lows and highs are boosted. General-purpose mics need a wide cut around 400 Hz.

Indeed, in the 1980s, one reason 4-band fully parametric EQs were demanded for premium live consoles was that the secret to kick drum EQ was the celebrated “double-midrange-cut,” with boosts at 80 Hz and 2 kHz.

A single midrange cut employs a wider bandwidth that steals thump and click at its skirts. Few inputs needed four bands as badly as the kick, and this helped drive the sales of premium live consoles.

Desks with swept mids, but fixed highs and lows, force one filter to be tuned as a low-mid cut, and the other to bring out the click, or to ‘put a point on it,’ in the vernacular.

Classics
By the 1980s other mics contended for the first channel. The beyerdynamic M 88, originally introduced as a premium hypercardioid dynamic for a wide variety of applications, was eventually discovered to be an outstanding kick drum mic.

However, repeated exposure deteriorates the compliance of the membrane and imparts a “wooly” sound that some actually prefer for the drum, but is no longer acceptable when combined with proximity effect on vocals.

Informed users therefore clearly mark their M 88s as to their designation for drums or vocals. 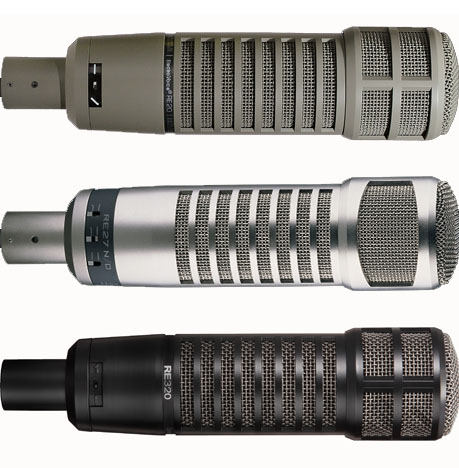 Top to bottom, EV RE20, RE27N/D and the newer RE320, which includes a switchable curve designed for kick drums.

The Electro-Voice RE20, heralded for bringing out the fullness of radio announcers, was also discovered to bring depth to the kick drum.

This mic was followed up a few years ago with the RE27 N/D which employs a neodymium-alloy magnet, hotter output, extended HF, a presence peak at 4 kHz, and provides two low-cut filters instead of one, plus a high-cut.

The AKG D 112 became the first “application specific” kick-drum mic, partly in response to complaints about expensive D 12E studio mics breaking down under high SPL in the kick drum. Today it remains one the most popular, and the first to marry aesthetics to functional contoured frequency response. It looks cool and sounds great.

The Audio Technica ATM25 followed as a great hypercardioid utility mic, and it has been compared to a highly directional rugged D 12E.