The Long And Short Of It: Acoustic Wavelengths

Understanding the nature of wavelengths can aid in optimally setting up and operating sound systems...

This is an important subject because understanding the nature of wavelengths can aid in optimally setting up and operating the various types of sound systems that most of us come in contact with.

Let’s look at the physical differential between low frequencies and high frequencies. They are quite radical, in the sense that we do not often encounter such a degree of variance in other fields.

By contrast, a short, high-frequency wavelength takes very little time to propagate and become audible, and can do so in small spaces, whereas a low-frequency wavelength needs adequate space in which to develop. This is why studio control rooms and other critical listening environments, particularly those that are on the smaller side, will often use bass traps to even out the bass response. Bass traps are acoustic energy absorbers designed to dampen low-frequency energy in order to provide a flatter, more even, low-frequency room response by reducing LF resonances. 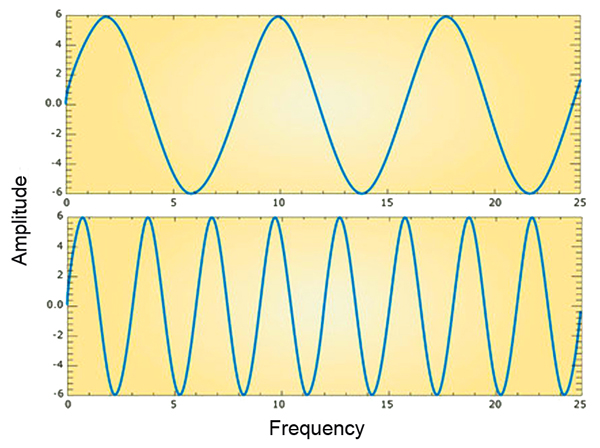 One or more bass traps, often located in the corners of the room for maximum effectiveness, will absorb the LF energy rather than let it reflect outward. Non-parallel walls and an angled ceiling can also help reduce standing waves. Incidentally, one reason that early trapezoidal loudspeaker enclosures were developed was to reduce internal cancellations. Within limits, the trapezoidal shape does exhibit certain advantages.

The differences in bass response from one room to another is one of the most apparent and meaningful effects that the room will contribute to the sonic quality.

On several occasions I’ve analyzed and equalized sound systems in large tents – once for Cirque du Soleil, another at a large business conference, and several times for general entertainment. Because tent walls are so flexible, low-frequency reflections are hardly evident at all. The LF energy literally moves the tent walls (you can feel it), thus being damped instead of reflected.

This certainly was a surprise to me after spending years tuning systems in concrete, steel, glass, and wooden structures. In the LF range it was similar to the response you expect to see when measuring outdoors. But unlike outdoors, mid and high frequencies showed pounced reflectivity and resonance, which is nearly the exact opposite of hard-walled rooms.

Long low-frequency wavefronts can be visualized by imagining large tsunami-type ocean waves crashing into buildings on the shore; they do not “see” the building as an obstacle and simply pass around it (assuming the building is of sufficient strength not to be destroyed). This is why it works to hang subwoofers behind a line array; they also do not “see” the line array as a barrier.

Conversely, short wavelengths can be visualized by imagining small ripples in the water that will break up, or reflect, when meeting an obstacle. As a case in point, even the typical perforated metal loudspeaker grille has a reflective and diffusing effect on high frequencies, though it is fairly minor in most cases.

How does understanding wavelengths lead to better sound system management? By knowing approximate wavelengths for various frequencies, and even visualizing them, you can potentially make better choices when it comes to loudspeaker placement. 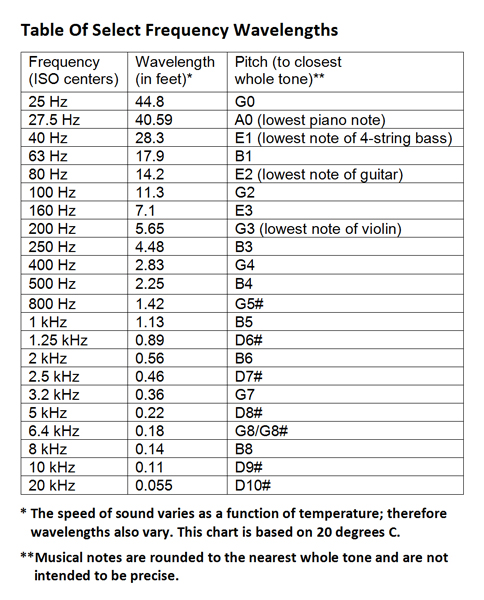 System design factors, such as controlling the distance between subwoofers and full-range loudspeakers, or planning the distances between one subwoofer to another, become clearer when you think in terms of frequency and wavelengths. One important topic is how the range of wavelengths will be affected throughout the crossover region from full-range loudspeakers (often flown) to the subwoofers (often ground stacked). When two sources are separated by a quarter wavelength or more, constructive and destructive interference will occur, depending on the position of the listener or the measurement mic.

With respect to crossovers, it’s important to understand that a 120 Hz crossover to the subwoofers (for example) does not only affect frequencies at 120 Hz. If the crossover slope is 12 dB per octave, which is common, then at 90 Hz and at 180 Hz, the half-octave intervals, there will still be a potential for cancellations – or beneficial summation – although it won’t be as pronounced as it is at the crossover’s center frequency. One of the loudspeakers will be 6 dB lower in amplitude while the other will be 6 dB higher, assuming that the crossover slope is symmetrical.

Yet while the cancellation or summation effect of the combined sources will be reduced in amplitude still, it will be present. This makes a good case for steeper crossover slopes, with 24 dB per octave or 48 dB per octave often being rapid problem solvers. But steeper is not always better, an involved discussion of it’s own outside of our scope here.