The Listening Room In Nashville Steps Up With Bose Professional

The Listening Room has moved through four locations since it was founded in the Nashville suburb of Franklin in 2006. Since then it has tracked the progression of Music City’s own explosive expansion, moving to the city’s early downtown loft-type location, Cummins Station, in 2008 and then to Second Avenue South, part of Nashville’s Lower Broadway live-music district, in 2013.

In late September 2017, it opened its biggest location yet, in the hip SoBro area – a two-room, 550-seat venue. What has remained constant throughout The Listening Room’s history has been sound systems from Bose Professional.

The first two locations used owner (and a singer/songwriter himself) Chris Blair’s personal pair of L1 portable systems for the house sound. The Second Avenue venue was its first foray into a Bose RoomMatch system, with over a dozen RoomMatch and RoomMatch Utility loudspeakers and subs, as well as one Panaray MB12-III modular bass loudspeaker, all powered by three PowerMatch PM8500N networked amplifiers and a single PM4500N amplifier, with processing handled by a ControlSpace ESP-4120 Engineered Sound Processor and CC-64 Control Center.

That system has stayed with the club in its newest location, augmented with additional RoomMatch, Panaray and FreeSpace loudspeakers and subs, which amply cover the 350-seat main listening room, a 150-seat bar/restaurant area, and a 100-seat patio. And Blair’s trusty L1 systems are still hard at work, acting as the patio sound system that can also connect with the patio’s Panaray loudspeakers via a Dante bridge. 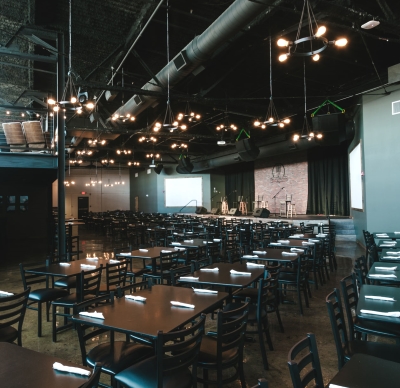 “We’ve been through a lot of locations,” says Blair, with the understatement of someone who has set up an entire club four times within little more than a decade. (“This time I got a 15-year lease – I don’t want to have to do that ever again,” he adds.) But he says the Bose sound has become an integral part of The Listening Room’s brand.

“They know our sound now,” he says of both the performers and the patrons. “In a city that’s the capital of music, you have to have the best sound to compete, and that’s been Bose ever since we began. We have a balcony in this new location, but with the RoomMatch speakers, any seat, anywhere in the house, is as good as any other seat. The consistency is amazing.”

Over the years and the various locations, Blair says he’s learned what works to make a club great. For instance, the new venue has direct access from a tour bus parking area to the club’s green room and then to the stage. But what hasn’t changed is how Bose Professional makes it all come together sonically. “We started with Bose,” says Blair, “and we’re staying with Bose.”