Investigating an alternative alignment strategy to achieve the most even coverage across the audience.

When introducing physical displacement between loudspeakers in multiple dimensions, we end up creating triangular pyramids with sides of different lengths between the loudspeakers and listeners.

These path differences create additional time offsets which make it even more challenging to remain time aligned for as many spectators as possible.

The usual approach is to time align both main loudspeakers and center subwoofer at front of house. This solution (Figure 1), however, creates a stalemate situation with no degrees of freedom to move.

Only at FOH do we find ourselves at the top of a triangular pyramid with at least two equilateral sides. The moment we abandon FOH in any direction, it’s impossible to remain equidistant and the phase aligned crossover starts to drift. 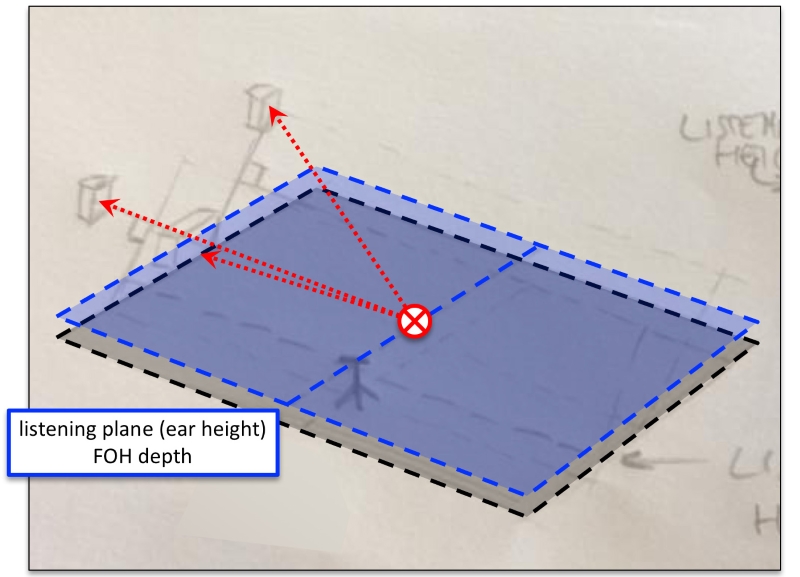 If we move left, the left main speaker starts to lead and the opposite speaker and center subwoofer start to lag at various rates. If we go right, it’s the other way around.

The top right of each prediction in Figure 2 shows both right loudspeaker solo and center subwoofer time aligned to each other at FOH. There’s clearly visible interference running left to right and front to back. Due to the various wavelengths, this interference becomes a moving target. Let’s investigate an alternative alignment strategy.

Figure 3 shows the intersection of the median plane, bisecting the line that connects main loudspeaker and subwoofer at a 90-degree angle (perpendicular), and the listening plane at ear height.

Along this intersecting line, there are zero offsets in distance, just as there aren’t any in the median plane between a left and right loudspeaker. 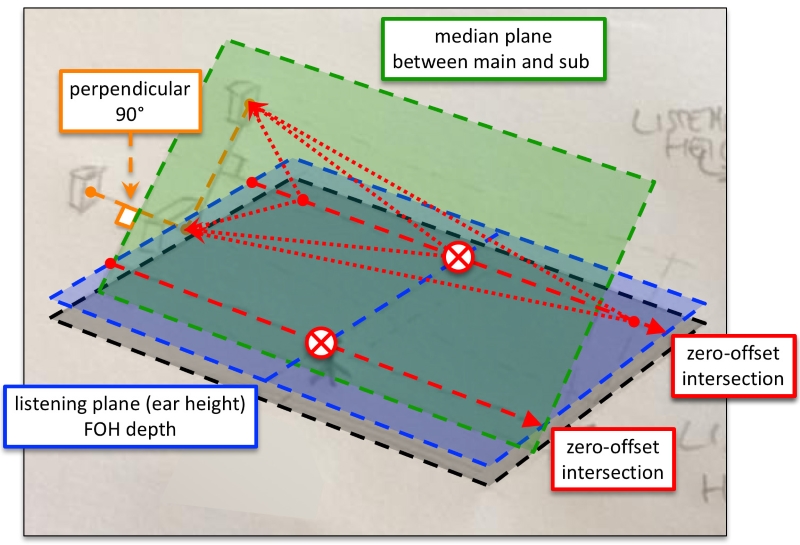 The top left of each prediction in Figure 2 for this particular alignment shows at least one degree of freedom, which allows us to move front to back without interference. Evidently, the opposite main loudspeaker will arrive late in this area, but it’s also alone. Its counterpart and center subwoofer are coupled “custodians” over this part of the audience, dominating by at least 6 dB.

This relative level difference of 6 dB or more, known as the transition and eventually isolation zones (front corners), will guarantee frequency response ripple variance of 12 dB or less in this area. Symmetry introduces a similar progression on the opposite side of the audience.

With both main loudspeakers and center subwoofer turned on, the FOH alignment at bottom right of each prediction in Figure 2 clearly shows more interference. This is particularity noticeable near the broad sides of the audience plane in the frequency span between 40 and 80 Hz.

So what are the trade-offs of this approach? In order to better gauge it, let’s divide the audience in thirds from left to right.